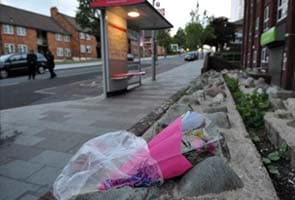 London: A post-mortem examination has found that the British soldier killed on a London street by suspected Islamists died of "multiple incised wounds", police said on Wednesday.

Lee Rigby, 25, was hacked to death in broad daylight a week ago by two men, one of whom later delivered an Islamist tirade to passers-by.

"A post-mortem established that the cause of death was from multiple incised wounds," London's Metropolitan Police said in a statement, adding that Rigby had been hit by a car before being attacked by the two men.

A formal hearing into Rigby's death will open at Southwark Coroner's Court in London on Friday, police added.

The announcements came as counter-terror detectives prepared to question one of the two prime suspects, both of whom were shot by police at the murder scene, and urged witnesses to come forward.

The first suspect, 22-year-old Michael Adebowale, was discharged from hospital on Tuesday and was being held at a south London police station ahead of questioning.

Adebolajo was filmed holding a bloody knife and a meat cleaver shortly after the attack, telling a passer-by he killed Rigby because British soldiers were killing Muslims every day.

Eight other people have been arrested over the case, including two women released without charge.

Both Adebowale and Adebolajo are converts to Islam who grew up in Christian Nigerian families.

Police on Wednesday appealed for witnesses to come forward, particularly those with information about the blue Vauxhall Tigra car that struck Rigby.

Promoted
Listen to the latest songs, only on JioSaavn.com
"A fast-paced and complex investigation is now under way led by detectives from the Met's Counter Terrorism Command," senior police officer Simon Letchford said at the murder scene, near Rigby's barracks in Woolwich, southeast London.

"We need to hear from anyone who may have seen Lee being attacked or who may have any other information that may help."