Theresa May is scheduled to sit down with Toyota's chairman during her three-day tour which starts in Osaka before moving to Tokyo where she will meet with Emperor Akihito and Prime Minister Shinzo Abe. 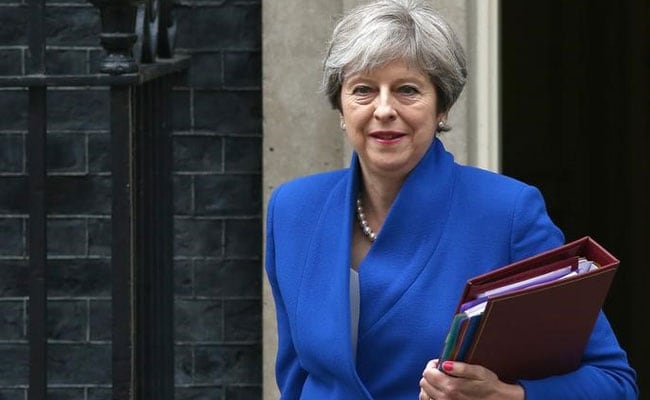 Osaka, Japan: British Prime Minister Theresa May arrived in Japan on an official visit on Wednesday with an eye to soothing Brexit fears and pushing ahead on early free-trade talks with the world's number three economy.

May is scheduled to sit down with Toyota's chairman during her three-day tour which starts in Osaka before moving to Tokyo where she will meet with Emperor Akihito and Prime Minister Shinzo Abe, who visited Britain this year.

Britain formally told the EU in March it will withdraw from the 28-member bloc, stirring fears in Japan about what the move would mean for companies with significant business interests in the country.

"We're going to ask for transparency and predictability so as to minimise the impact on (our) companies," a Japanese foreign ministry official in charge of European affairs said ahead of May's visit.

More than 1,000 Japanese companies do business in Britain, employing some 1,40,000 local people with many using Britain as as a staging post to do business in Europe.

But Britain is now at risk of losing the "passporting rights" financial firms use to deal with clients in the rest of the European bloc.

That, along with political uncertainty surrounding Brexit negotiations, has spurred foreign companies that have set up shop in Britain, or established European headquarters there, to begin looking for alternative locations.

Japanese megabank Mitsubishi UFJ has said Amsterdam and Paris were favourites to be the new European base for its securities operations.

Britain's foreign minister Boris Johnson boasted about Japan-UK investment when he visited this summer, but local firms will be looking for solid assurances from May, who is travelling with a business delegation.

"The best scenario for us is that Britain cancels its Brexit decision," said Ichiro Hara, head of the international affairs bureau at Japan's top business lobby Keidanren.

"But if that isn't an option, we are saying we need a transitional period... to mitigate the negative impact," he told AFP.

May -- who arrived in Osaka on Wednesday and is to attend a traditional tea ceremony in nearby Kyoto -- will also be discussing issues tied to global terrorism and regional security, after North Korea sharply escalated regional tensions by launching a ballistic missile over Japan on Tuesday.

"The prime minister is outraged by North Korea's reckless provocation and she strongly condemns these illegal tests," a spokeswoman for May said Tuesday.

"From our perspective, we are willing to continue to work with our international partners to keep the pressure on North Korea."

May is also expected to focus on pushing forward with plans for a Britain-Japan free trade agreement.

But analysts said there would not likely be much progress until Japan and the EU wrap up a nearly-finalised trade deal, and details of Brexit are worked out.