British Election: What You Need To Know

The vote will determine who gets to negotiate Britain's departure from the European Union over the next two years. 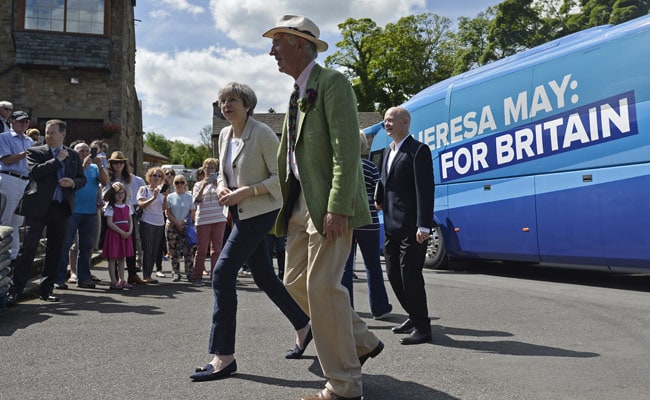 Britain's Prime Minister Theresa May during an election campaign visit to Horsfields Nursery.

London: In shadow of two terror attacks during the campaign, Britain's snap general election is set to go ahead on Thursday and will decide who shapes the United Kingdom's future as it leaves the European Union.

Conservative Prime Minister Theresa May, who came to power without a national vote last year after David Cameron's resignation, called the election three years early after just one year in charge.

Why is the election important?

The vote will determine who gets to negotiate Britain's departure from the EU over the next two years, and the strength of mandate that the government will have in parliament for five years.

Britain's new leader will also have to deal with the aftermath of a terror rampage in a night-life hub in London on Saturday night, the third ISIS attack in the country in less than three months.

Britain takes a leading role in global anti-terror efforts and is a key member of the US-led coalition bombing ISIS positions in Iraq and Syria.

It holds veto power at the United Nations, where it is one of the five permanent members of the Security Council along with China, France, Russia and the United States.

It is a NATO member with a nuclear weapons deterrent, the world's fifth-biggest economy by gross domestic product and a member of the G7 group of leading industrial powers and the wider G20.

How does the election work?

There are 650 constituencies across the UK, meaning 326 MPs are needed for an absolute majority in parliament's lower House of Commons.

May had a slim working majority of 17 at the dissolution of the last parliament and called the election in a bid to strengthen her position going into the Brexit talks.

Each constituency is won on a first-past-the-post basis, meaning the candidate with the most votes in that seat becomes its MP.

Despite the focus on the party leaders, voters are not directly choosing their prime minister, only their local MP.

A parliament is elected for a maximum of five years, meaning the next general election must be held by June 2022 at the latest.

British, Irish and Commonwealth residents aged 18 and over can vote, plus British citizens and Irish citizens from Northern Ireland living abroad who have been registered to vote in the UK within the last 15 years.

Citizens must register to vote and voting is not compulsory.

The main parties across the whole of Britain are the Conservatives (centre-right), led by May, and Labour (left), led by Jeremy Corbyn, followed by the Liberal Democrats (centre-left), the UK Independence Party (populist) and the Greens (left).

Polls suggest the Conservatives are on course for victory. However, Labour might be able to form a government with backing from smaller left-wing parties.

The main issues are Brexit, terrorism, the state-run National Health Service, immigration and the economy, according to polls.

Some 3,303 candidates are standing. A &#163;500 deposit is required to stand, which is refunded if candidates get five percent of the votes cast.

The vote-counting begins immediately after the polls close and by dawn on June 9 the picture of who has won should be clear.

As soon as possible, the head of state, Queen Elizabeth II, asks the person most likely to command the confidence of the Commons to become prime minister and form and administration.

This will typically be the leader of the largest party and would happen only once the likely nature of the government is clear.

Parliament meets on June 13 to elect a new speaker and swear in MPs.

The state opening of parliament by Queen Elizabeth takes place on June 19, when she will read out her government's programme for the coming parliamentary year.

The Brexit negotiations are also due to start in the week beginning June 19.


(This story has not been edited by NDTV staff and is auto-generated from a syndicated feed.)
Comments
British Prime Minister Theresa MayEuropean UnionISIS Attacks