Billed As "One Of The Most Exciting Artists", She's Ultra-Realistic Robot

Ai-Da is the brainchild of Aidan Meller, who claims she is the world's first ultra-realistic humanoid artist, able to draw creatively thanks to in-built artificial intelligence (AI) technology. 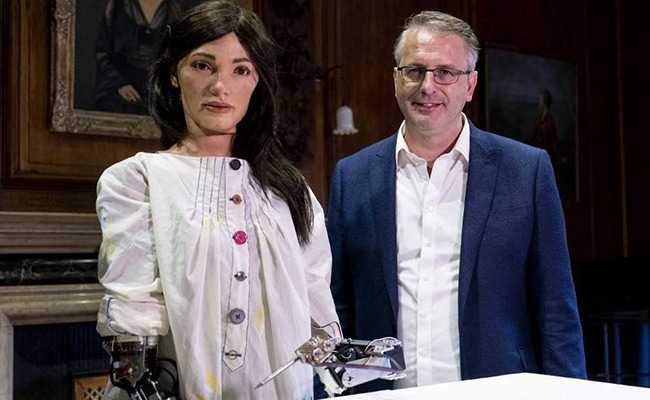 Ai-Da can currently only hold certain hard tools like pencils, not brushes (AFP)

Billed as "one of the most exciting artists of our time", Ai-Da differs from generations of past masters in one inescapable way: she is a robot.

Ai-Da is the brainchild of Aidan Meller, who claims she is the world's first ultra-realistic humanoid artist, able to draw creatively thanks to in-built artificial intelligence (AI) technology.

The 46-year-old art dealer unveiled Ai-Da -- dressed in a brown wig and period-style painter's blouse -- in Oxford on Wednesday, ahead of an exhibition of her first works opening next week in the English university city.

"She is fully algorithmic... fully creative," Meller told reporters, standing alongside his creation.

"She is not an expensive printer. We do not know what she's going to do," he insisted.

As he spoke, an occasionally blinking Ai-Da, built with cameras for eyes and a robotic arm to draw with, worked on a sketch of him from behind a desk.

Several dozen of Ai-Da's other works adorned the nearby walls. They include similarly styled pencil sketches of historical figures from Leonardo da Vinci to Alan Turing.

There are also colourful paintings and sculptures based on her initial sketches, completed by human assistants.

Ai-Da can currently only hold certain hard tools like pencils, not brushes.

AI has already been deployed by art pioneers elsewhere to create new work, but Meller told AFP that his project represented "genuine innovation".

But he only began seriously working on the project in 2017, after concluding that the common thread linking history's greatest artists was that they had all captured "the zeitgeist of their time".

Reasoning that the coming age of AI was today's equivalent, Meller set about creating a robotic artist to fuse his ideas into one grand artistic endeavour.

"It's a nuts project, completely left of field," he said.

With the help of British robotics company Engineered Arts, and researchers at both Leeds and Oxford universities, Ai-Da was finally completed in April.

Meller was eager for her to adopt a female persona because he argued the art and coding worlds need more women represented.

The avatar uses her camera "eyes" to capture what is in front of her, which an internal computer -- and its machine-learning technology -- translates into the coordinates of a corresponding image to be plotted on a page.

She can move, allowing what Meller calls "performance art" which features in several videos at the upcoming exhibition.

Meller hopes that Ai-Da will also eventually be able to intuitively communicate and perhaps describe her own artwork.

But for the moment she is given voice by a human helper listening from her home studio outside Oxford, who responded to reporters' questions on Wednesday.

Despite technology's paramount role in the work produced by Ai-Da, Meller is adamant it is also the fruit of a "highly creative" process.

"She has the incredible technologies and abilities to produce remarkable, innovative, creative artwork," he said, noting no two works are ever the same.

Meller is cagey about how much the project has cost, saying only that funding has come from sales of the resulting artworks.

(Except for the headline, this story has not been edited by NDTV staff and is published from a syndicated feed.)
Comments
Robot artistAi-Da