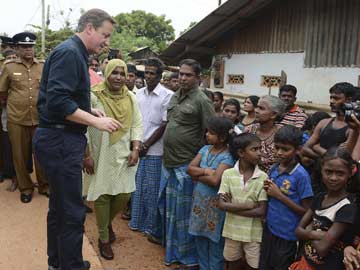 Colombo: Britain's Prime Minister David Cameron on Saturday threatened to push for an independent international inquiry into allegations of war crimes at the climax of Sri Lanka's 26-year civil war if the island nation does not conduct its own probe by March 2014.

Cameron has been the most vocal critic of Sri Lanka's record on rights during a biennale summit of Commonwealth nations being held in the capital Colombo. The normally sedate event has been shaken by the intensifying row over atrocities during the final months of the war and ongoing abuses ever since.

March is when the UN Human Rights Commission next meets to assess Sri Lanka's progress on addressing human rights abuses including allegations of war crimes. It was not immediately clear what form an international inquiry would take. Sri Lanka has in the past refused to allow the United Nations unfettered access to the former war zones.

The Sri Lankan army crushed Tamil Tiger separatists in the final battle of a long civil war in 2009, in a strategy partly drawn up by President Mahinda Rajapaksa's brother, defence secretary Gotabaya Rajapaksa.

Some 300,000 civilians were trapped on a narrow beach during the onslaught and a UN panel estimates 40,000 non-combatants died. Both sides committed atrocities but army shelling killed most victims, it concluded.

Since the end of the war, harassment of government critics, including attacks on journalists and human rights workers have continued. A heavy army presence on the former Tamil Tiger strongholds in the north of the country angers some local ethnic Tamils who feel they are treated as enemies of the state.

"Ultimately all of this is about reconciliation. It is about bringing justice and closure and healing to this country which now has a chance of a much brighter future. That will only happen by dealing with these issues and not ignoring them," Cameron said in a news conference.

The government, run by Rajapaksa and several of his family members, disputes the number given for civilian deaths and says civilian casualties were far lower. It says criticism of its record on rights amounts to foreign interference in its affairs.

"We are not going to allow, definitely we will object it," another one of the president's brothers, Economic Development Minister Basil Rajapaksa said in response to a question about the possibility of an international inquiry.

At the opening ceremony of the Commonwealth meeting on Friday, the president said he had saved lives by ending the war and that the Commonwealth should not be a punitive organisation dominated by "bilateral agendas."

The Commonwealth groups 53 nations, mostly former British colonies, and is headed by Queen Elizabeth. It has little power or economic clout but sometimes plays a role in resolving disputes.

Sri Lanka had predicted 37 of the Commonwealth's member nations would attend the summit. In the end, just 26 showed up. The leaders of Canada and Mauritius publicly boycotted the event because of concerns about human rights. India's prime minister stayed away because of pressure from Indian ethnic Tamils.

There have been calls, including from Britain's Labour party, to block Rajapaksa from assuming the chair of the Commonwealth, a largely ceremonial position Sri Lanka is entitled to as the host of the summit. Labour fears the role will allow the president to be involved in the Commonwealth Games to be hosted in Glasgow in 2014.

Government supporters protesting on Colombo's streets accuse Britain of neo-colonialism for telling the Rajapaksa government how to behave. The lead editorial in pro-government newspaper The Island asked whether the hostile diplomacy was not "war by other means".

Since the civil war ended, the government has made rapid progress on rebuilding the war-torn north, especially road projects. Elections in the northern province in September resulted in a landslide victory for a Tamil opposition party formerly linked to the Tigers.

Promoted
Listen to the latest songs, only on JioSaavn.com
In a meeting on Friday, Rajapaksa told Cameron that it was only four years since the war had ended and the country needed more time to overcome its problems.