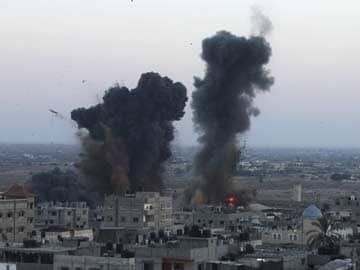 Smoke and flames are seen following what witnesses said were Israeli air strikes in Rafah in the southern Gaza Strip.

London: British Foreign Secretary William Hague said on Saturday he was "extremely concerned" about the loss of life in Gaza, where five days of Israeli air strikes have killed more than 120 Palestinians.

"Extremely concerned about humanitarian situation and loss of life in Gaza. Speaking to President Abbas today," Hague said on Twitter.

The Foreign Office confirmed the tweet and said that a fuller statement would be issued later.

Hague's statement represents a departure from the British government stance so far which has unequivocally backed Israel's right to launch air strikes in response to rocket attacks by Hamas militants based in Gaza.

Israel has vowed no let up in its air campaign to halt the rocket attacks, while a defiant Hamas has rejected international calls to halt hostilities, insisting Israel must act first.

Promoted
Listen to the latest songs, only on JioSaavn.com
Diplomatic efforts to stop the violence have also seen US President Barack Obama telephoning Netanyahu and Washington offering to use its relationships in the Middle East to bring about a return to calm.

Despite international concern, truce efforts have been unsuccessful, according to Egypt, which has been key in mediating previous ceasefires between Hamas and Israel.
Comments
gaza attack