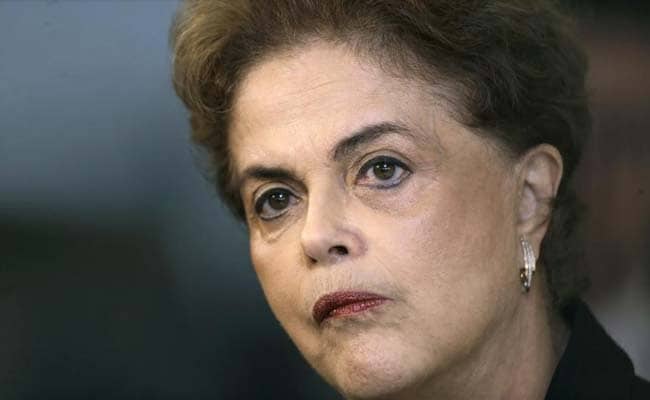 Dilma Rousseff, needs to secure support from a handful of extra senators to swing the vote. (File Photo)

Lula, Brazil's most prominent leftist leader, told Radio Jornal that Rousseff's case is not hopeless, despite months of mounting pressure on her to be removed from office.

Previous votes in the lower and upper houses easily passed the simple majorities needed to send her to trial for allegedly breaking budgetary laws -- a case she claims is a coup d'etat.

However, when the Senate votes again in a final session on August 25-27, it must reach a two-thirds majority and the result is expected to be far closer.

"To defeat the impeachment is easier than before," said Lula, who was president from 2003-2010 and founded the Workers' Party, which has been in power for 13 years.

Lula said Rousseff, 68, needs to secure support from a handful of extra senators to swing the vote. "Dilma depends on only six votes," he told the radio station from northeastern Pernambuco state.

The Senate must vote by 54 votes out of 81 for the impeachment to pass. In that case, Rousseff foe Michel Temer, who is currently serving as interim president, would stay as president until the next scheduled elections in 2018.

If the vote fails, Rousseff would return to office. However, she is seen as badly weakened, with rock bottom popularity in a country that blames her for a deep recession, massive corruption and months of political instability.

Temer and Rousseff are both invited to the opening ceremony of the Olympics, which start in Rio on August 5.
© Thomson Reuters 2016

(This story has not been edited by NDTV staff and is auto-generated from a syndicated feed.)
Comments
Dilma RousseffLuiz Inacio Lula da SilvaBrazil ImpeachmentRouseff Impeachment