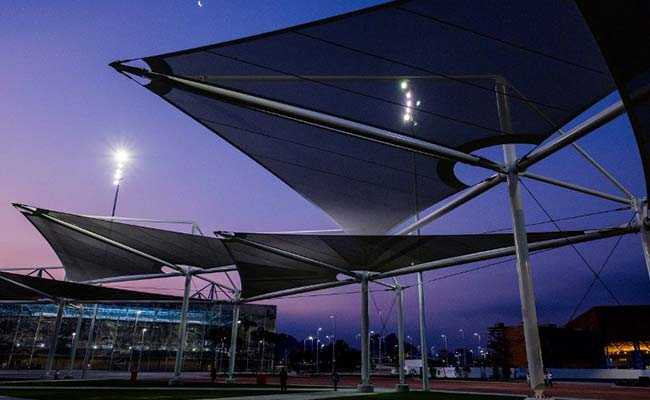 Stunning scenery and traditional Brazilian warmth mean the 10,500 athletes from 206 countries and 450,000 tourists should have a spectacular time. (AFP Photo)

Rio de Janeiro: Brazil promises a roaring Rio Olympics party, but with 100 days to go before the sporting mega bash, the hosts are battling nightmarish political and economic gate crashers.

Stunning scenery and traditional Brazilian warmth mean the 10,500 athletes from 206 countries and 450,000 tourists should have a spectacular time.

But the first Olympics ever staged in South America is threatened by an almighty hangover before it even gets under way.

The revelation by officials Monday that 11 people have died on Olympic construction sites -- compared to eight across all Brazil for the 2014 World Cup -- cast a grim shadow.

Then there is the major turmoil on the political stage where President Dilma Rousseff faces impeachment.

Usually, Rousseff would be the one in Rio's Maracana stadium announcing the Games open on August 5. However, with impeachment proceedings -- that she claims are a coup d'etat -- about to start, Rousseff is likely to be replaced by her vice president, Michel Temer.

And the fact that Temer also faces possible impeachment illustrates how volatile Latin America's biggest country has become -- a fact that could point to turmoil, including street protests, just when the international spotlight is on Brazil.

Throw in a tanking economy, high crime and the Zika virus and some start asking whether Brazilians will even want to turn up to Rio's $11 billion show.

"The Games are a huge party," says Pedro Trengrouse, a sports expert at the Fundacao Getulio Vargas think tank in Rio. "But we only party when we're happy."

When an ecstatic Rio won the hosting rights back in 2009, Brazil was a samba-dancing economic wonder.

Today the economy is in steep decline, with a second successive 3.8 percent contraction forecast this year. Unemployment has shot up to 10.2 percent and rating agencies have downgraded the country's credit status to junk.

Money is so tight that the state of Rio can't even pay government employees, including many medical staff, on time.

Olympic organizers have also had to slash their budget, cutting back on everything from printer ink to seating at the rowing venue.

Officials insist that nothing important will be missing. But the deadlines are -- perhaps in typical Brazilian last-minute style -- getting awfully tight.

A metro extension considered vital to moving people between the south of Rio and the major hub at Barra da Tijuca on the outskirts is only on schedule for opening July 1, five weeks before the Games. A leaked letter from the city mayor, Eduardo Paes, in February warned of "high risk" that even this wouldn't be met.

In perhaps the biggest fail of all, little has been done to stop the raw sewage and garbage pouring into the bay where sailing and windsurfing events will take place.

Tourists and athletes might not even notice the political and financial upheaval.

But they've been told to watch out for mosquitoes carrying Zika, a virus that causes flu-like symptoms and in the case of pregnant women can lead to birth defects. Apart from fumigating sites, the authorities are counting on August's typically lower mosquito population to prevent embarrassment.

Violence is also a big worry in a city with almost four murders a day.

Just last week a man was shot dead while walking his dog in daylight right by the city's most famous hotel, the Copacabana Palace. Drug gangs have used hand grenades in a recent shootout in the ultra-chic Ipanema neighborhood.

Rio will deploy 85,000 police and soldiers -- double the number used in the 2012 London Games -- to try to keep a lid on crime. But with Brazil's security forces having no direct experience of fighting terrorism, questions have been raised over the potential threat from violent Islamists.

Counter-terrorism chief Luiz Alberto Sallaberry told G1 news site this year that there was a "heightened" risk after deadly attacks on civilians in Europe.

Still, US water polo veteran Olympian Tony Azevedo predicts the Brazilians' "love (of) throwing a good party" will win in the end.

"I think this Olympics could go down for them as a changing point in the history of Brazil," he said.
Comments
Rio Olympics preparationBrazil OlympicsRio Olympics Problems