Brazil's confirmed cases climbed past Germany and France this week, growing at a daily pace second only to the United States. 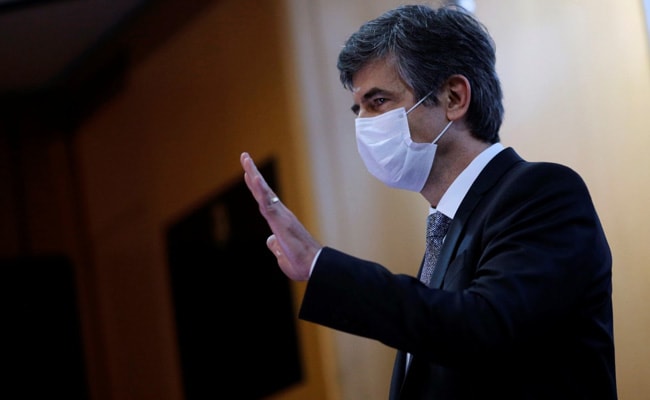 Nelson Teich is the second doctor to leave the top Health Ministry job as the outbreak explodes.

Brazil lost its second health minister in a month on Friday after President Jair Bolsonaro demanded wider use of unproven anti-malarial drugs to fight the coronavirus outbreak, adding to turmoil in one of the pandemic's worst global hotspots.

Brazilians banged pots from windows and health experts reacted with outrage at the resignation of Nelson Teich, the second doctor to leave the top Health Ministry job as the outbreak explodes

Brazil's confirmed cases climbed past Germany and France this week, growing at a daily pace second only to the United States. Bolsonaro had demanded on Thursday that Teich issue federal guidelines for the early use of hydroxychloroquine to treat coronavirus patients, despite studies that cast doubt on the effectiveness of the malaria drug for COVID-19 and raised concerns it may cause heart problems.

"I was elected to make decisions. And the decision about chloroquine goes through me," Bolsonaro told business leaders in a video conference on Thursday, adding that his call to end state orders on social distancing should also be the last word.

"Just like a commander in battle: He has to decide. Are people going to die? Unfortunately, people are going to die," he said.Teich, an oncologist and healthcare entrepreneur, gave no reason for quitting in brief comments to journalists on Friday

He had also become out of step with Bolsonaro's push to reopen the economy, expressing surprise at a news conference on Monday when he learned of a presidential decree allowing gyms, beauty parlors and hairdressers to open

Military members of the Brazilian cabinet are pushing for interim health minister Eduardo Pazuello, an active-duty army general, to take over full-time, a government official told Reuters, requesting anonymity to discuss confidential talks.The presidential press office did not respond to a request for comment.

Bolsonaro's chief of staff, Walter Braga Netto, told journalists that Teich had left for "personal reasons" after a friendly conversation with Bolsonaro on Friday

The president "had a different vision about which protocol to follow," Braga Netto said, without elaborating.Late on Friday, the Health Ministry said it was finalizing new guidelines for early treatment of coronavirus patients, including proposed medications

Asked about the statement, a ministry representative told Reuters that hydroxychloroquine would be one of the medications cited.Teich's predecessor, Luiz Henrique Mandetta, a former lawmaker and military medic, was fired on April 16 for resisting Bolsonaro's demands to promote hydroxychloroquine and fight against state governments' isolation orders.

The Health Ministry confirmed more than 15,000 new cases of the virus on Friday.

Brazil has confirmed more than 218,000 cases so far, on pace to pass Italy's nearly 224,000 cases this weekend as it closes in quickly on Spain and the United Kingdom despite rolling out far fewer tests.

Brazil's death toll has risen by more than 800 per day to nearly 15,000 on Friday, as the crisis overwhelms hospitals in several cities and public cemeteries resort to mass graves.

"Bolsonaro does not want a technical minister, he wants someone who agrees with his ideological insanity, like ending social distancing and using chloroquine," Molon, of the Brazilian Socialist Party, said in a statement.Bolsonaro's handling of the coronavirus has been widely criticized globally as he has shrugged off the severity of the disease and told Brazilians to ignore quarantine restrictions.

The U.S Food and Drug Administration last month cautioned against the use of hydroxychloroquine to treat the coronavirus, warning it could cause heart problems

President Donald Trump, another world leader who has played down the pandemic's dangers, at one point touted the drug as a "game changer."

Two new studies published on Thursday found that patients on hydroxychloroquine did not get better significantly faster than those not treated with the drug.