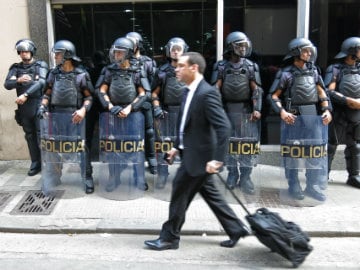 File Photo: A pedestrian walks by a line of police officers as they block the entrance of the Transportation Department when subway workers arrive to request a meeting with officials, to negotiate better salaries and benefits in Sao Paulo.

Sao Paulo, Brazil: A subway strike in Sao Paulo that threatened to disrupt the opening of the World Cup was averted Wednesday night even as airport workers in Rio de Janeiro declared a 24-hour work stoppage in the main destination for soccer fans traveling to Brazil.

Some 1,500 subway workers in Sao Paulo voted against going back on strike in a pay dispute. They had suspended the walkout Monday amid a popular backlash and government pressure to end the transportation chaos in Brazil's biggest city.

"We thought that right now it's better to wait," union president Altino Prazeres said, but added that he wouldn't rule out resuming the strike sometime during the monthlong soccer tournament. "We get the feeling that maybe we aren't as prepared for a full confrontation with police on the day the World Cup starts."

The union said its members would hold a march Thursday morning demanding that 42 workers fired during the five-day work stoppage are rehired.

World Cup organizers are counting on Sao Paulo's subway system to carry tens of thousands of fans Thursday to Itaquerao stadium, where Brazil will play Croatia in the tournament's first game far from the hotel areas where most tourists are staying.

Even as tensions eased in Sao Paulo, labor conflicts heated up in Rio, where fans were arriving ahead of Sunday's match between Argentina and Bosnia-Herzegovina.

On Wednesday, check-in counter clerks, baggage handlers and janitorial staff who have been demanding raises of at least 5.6 percent for several months voted to strike starting at midnight. The work stoppage will affect the city's Galeao international airport as well as the Santos Dumont airport that connects Rio to other Brazilian destinations

A union representative said only 20 percent of workers would stay off the job for 24 hours, abiding by a labor court order that threatened to fine unions more than $22,000 if staffing fell below 80 percent of normal levels. The official agreed to discuss specifics of the walkout only if not quoted by name because he wasn't authorized to speak publicly.

The airport workers' strike is the latest unrest to hit Brazil as workers battered by several years of high inflation take advantage of the spotlight from the World Cup to pressure for pay raises from employers and the government.

In the northern city of Natal, where the United States plays its first game Monday against Ghana, bus drivers will stay home Thursday for at least 24 hours to press their demands for a 16 percent pay increase.

Teachers remain on strike in Rio and routinely block streets with rallies, and subway workers in that city briefly threatened a walkout. Police in several cities have also gone on strike in recent weeks, but are back at work now.

Promoted
Listen to the latest songs, only on JioSaavn.com
There also has been a steady drumbeat of anti-government protests across Brazil criticizing the billions spent on hosting the World Cup and demanding improvements in public services. The protests that began last year have diminished in size but not in frequency, and they also have disrupted traffic at times.