Boy Unexpectedly Walks Onto Stage, Says Hello To Pope, Asks For His Cap

The boy, wearing a black tracksuit with yellow stripes, grasped a smiling Francis by the hand, before being offered a chair next to the pontiff by a senior Vatican official. 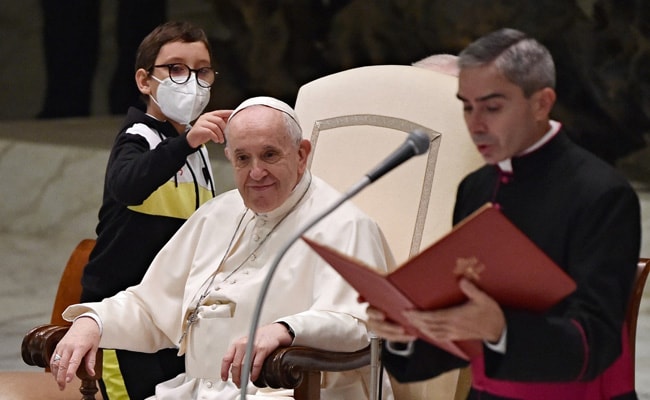 The boy asked for Pope Francis's cap, touching it to make it clear what he wanted.

A boy who walked unexpectedly onto the stage to say hello to Pope Francis during the weekly Wednesday audience at the Vatican won a white papal skullcap to take home.

The boy, wearing a black tracksuit with yellow stripes, grasped a smiling Francis by the hand, before being offered a chair next to the pontiff by a senior Vatican official.

He did not stay sitting for long, though.

After getting up and grasping the pope's hands again, he asked the official for Francis's cap, touching it to make it clear what he wanted.

The 84-year-old pope referenced the boy during his address, saying: "I was reminded of what Jesus said about the spontaneity and freedom of children, when this child had the freedom to approach and move as if he were at home.

"And Jesus tells us if you don't make yourselves like children, you will not enter the Kingdom of Heaven."

He told the crowd in the Paul VI hall inside the Vatican: "Have the courage to approach the Lord. I thank this child for the lesson he taught us all.

"And may the Lord help him in his limitation, in his growth, because he has acted from the heart."

The boy was later waved off the stage by Francis, proudly wearing his brand new "zucchetto" -- the type of small and round white ecclesiastical skullcap worn by the pope.

It was not the first time the head of the Roman Catholic Church has been upstaged during the audience.

In 2018 a mute child from the pope's native Argentina climbed onto the stage and rolled around the floor, before taking a keen interest in a colourfully-dressed Swiss guard.