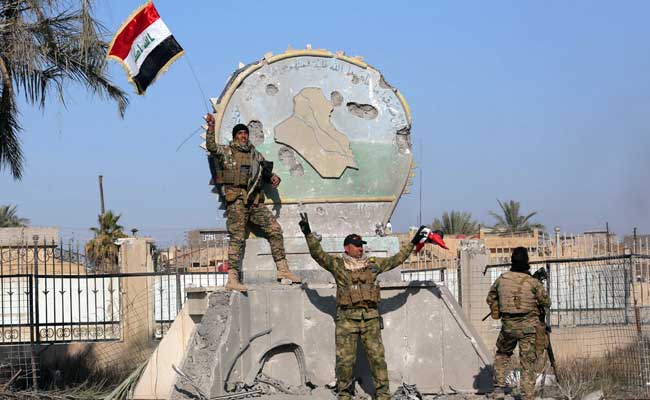 A member of the Iraqi security forces holds an Iraqi flag at a government complex in the city of Ramadi, on December 28, 2015. (Reuters file photo)

Ramadi, the capital of Anbar province, was touted as the first major success for Iraq's army since it collapsed in the face of ISIS's lightning advance across the country's north and west 18 months ago.

The militants have been pushed to Ramadi's eastern suburbs, but almost all of the city, which was battered by US-led air strikes against ISIS, remains off-limits to its nearly half a million displaced residents, most of whom fled before the army advance.

"Most areas are now under the security forces' control," Anbar governor Sohaib al-Rawi said on Saturday at a temporary government complex southeast of the city.

"Most of the streets in Ramadi are mined with explosives so it requires large efforts and expertise," he said.

The counter-terrorism forces which spearheaded the city's recapture are securing only main streets and tactically important buildings, security sources said.

They have built up earth banks at the entrance of central neighbourhoods deemed clear of militants but still laden with explosives, and marked buildings' exteriors as "mined", the sources added.

Snipers have also slowed progress. Iraqi forces clear them by calling in devastating airstrikes - more than 55 in the past two weeks, according to the coalition.

Iraqi forces withdrew from Ramadi in May last year, allowing ISIS to take control, the group's biggest gain since sweeping across the Syrian border a year earlier and declaring it was establishing a caliphate.

ISIS fighters are still holed up in a roughly 10 kilometre (6 mile) stretch east towards Husaiba al-Sharqiya using agricultural lands to evade detection, security sources said. It could take at least 10 days to clear those areas.

Hundreds of airstrikes since July, combined with ISIS sabotage, have reduced much of Ramadi to rubble.
The United Nations Development Programme (UNDP) is still waiting for the green light from the Iraqi government to enter the city and start work to rebuild it, the deputy head of its Iraq programme, Lise Grande said.

UNDP has prepared 100 generators and mobile electrical grids to provide a temporary power grid as soon as that happens. An assessment of the damage to the rest of Ramadi's infrastructure will dictate other areas of focus.

The city will require around $20 million immediately for emergency humanitarian response and billions more for long-term reconstruction, said Grande.

"Restoring infrastructure is hugely important, but the decisive factor in getting people to return is when they think security is in place," she said.

After Ramadi, there remains the bigger challenge of Mosul, 400 km (250 miles) north of Baghdad. As many as 3,200 ISIS fighters are there, more than three times the number that held Ramadi, according to the coalition.

It is also more densely populated. Most of Mosul's pre-2014 population of about two million have not left.

The destruction in Ramadi has sparked criticism including from powerful Iranian-backed Shi'ite militias, which were kept out of the battle for fear of stirring sectarian tensions in Anbar's Sunni heartland.

Despite accusations of human rights abuses, groups like Asaib Ahl al-Haq claim they have could have retaken Ramadi more "neatly".
© Thomson Reuters 2016