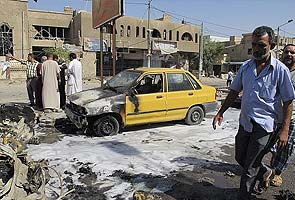 One of the blast sites in Baghdad

Baghdad: A series of car bombings and other attacks across Baghdad on Wednesday killed 86 people and wounded 263, police and medical sources said, extending the worst wave of sectarian bloodshed in Iraq for at least five years.

It was not immediately clear who carried out the attacks, which appeared coordinated, but Sunni Muslim insurgents including the al Qaeda-affiliated Islamic State of Iraq have significantly stepped up bombings this year.

In Sadr City, an impoverished Shi'ite district in Baghdad's northeast, two car bombs killed seven people. A restaurant owner said he saw an attacker just before one of the explosions.

"A man parked his car in front of the restaurant. He got breakfast and drank his tea. (Then) I heard a huge explosion when I was inside the kitchen," the owner, who requested anonymity, told Reuters.

"When I went outside, I saw his car completely destroyed and he had disappeared. Many people were hurt."

Car bombs hit south, north and western Baghdad in a cluster of attacks early in the day and late in the evening which targeted both Shi'ite and Sunni areas of the capital.

The Interior Ministry described the attacks as "terrorist explosions" but said the number of people killed was only 20, with 213 wounded. The Shi'ite-led Baghdad government has said that media reports exaggerate attacks in Iraq and that security forces have stopped many attempted bombings.

However, Wednesday's violence was worst since August 10, when nearly 80 people were killed during a religious holiday.

More than 1,000 Iraqis were killed in July, the highest monthly death toll since 2008, according to the United Nations.

The renewed violence, 18 months after US troops withdrew from Iraq, has stirred anxiety about a relapse towards the widespread sectarian slaughter of 2006-07.

In other attacks on Wednesday, gunmen killed six members of al-Sahwa - former Sunni insurgents who rebelled against al Qaeda - in an ambush on a checkpoint in Latifiya, a suburb 40 km (25 miles) south of Baghdad.

In Kadhimiya, a neighbourhood in northwestern Baghdad, two roadside bombs and one car bomb killed five people and wounded nearly 30, the sources said.

Four soldiers were killed and five were wounded in Madaen, southeast of Baghdad, by a roadside bomb which targeted an Iraqi army patrol, police and medics said.

Promoted
Listen to the latest songs, only on JioSaavn.com
After years of reduced violence, the intensity of attacks has dramatically risen since the start of 2013. Bombings have often targeted cafes and other places where families gather, as well as the usual military facilities and checkpoints.