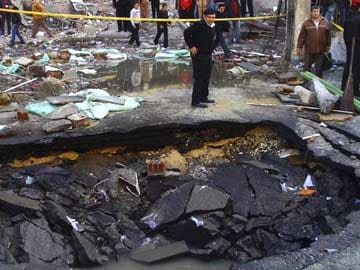 A police officer inspects a crater made after a bomb attack in front of the Cairo Security Directorate building, which includes police and state security, in downtown Cairo on January 24, 2014.

Cairo: A bomb exploded near a police academy in Cairo on Saturday, security sources said, a day after a wave of deadly blasts raised fears that an Islamist insurgency was gaining momentum.

No one was wounded in Saturday's explosion, said the interior ministry, but more violence was expected as rival political movements gather to mark the third anniversary of the uprising that toppled autocrat Hosni Mubarak.

Islamist militants based in the Sinai Peninsula have stepped up attacks since the army toppled President Mohamed Mursi of the Muslim Brotherhood in July. Hundreds of security forces have been killed.

Militant group Ansar Bayt al-Maqdis (Supporters of Jerusalem) claimed responsibility for the attacks, including a car bomb at a security compound in central Cairo, in a message posted online, said US-based SITE.

The message told Muslims to stay away from "enemy headquarters and security centres".

The army-backed government, along with state-run and most private media, accuse Mursi's Brotherhood of carrying out terrorist attacks.

Authorities have tightened security around Cairo in anticipation of trouble, as rival political factions plan to gather to mark the anniversary of Mubarak's downfall.

Police and army have deployed heavily, and helicopters flew over a ghostly quiet downtown Cairo on Saturday morning.

Mohamed Saleh, a 63-year-old taxi driver, said he planned to commemorate the 2011 revolt by going to Tahrir Square, the symbolic heart of the uprising, but the square was tightly sealed off by armoured vehicles on Saturday morning.

"This was a complete popular uprising by the people," Saleh said, recalling the historic 18 days of protests that led to Mubarak's ouster. "It was protected by the army," he added.

Promoted
Listen to the latest songs, only on JioSaavn.com
Clashes in the capital and several other cities on Friday between Mursi supporters and security forces killed 14 people, in another sign of high tensions in the biggest Arab nation.