The video clip of the incident shows officer at wheel grab his gun and pepper his windshield with bullets in a bid to stop the suspect driving ahead. 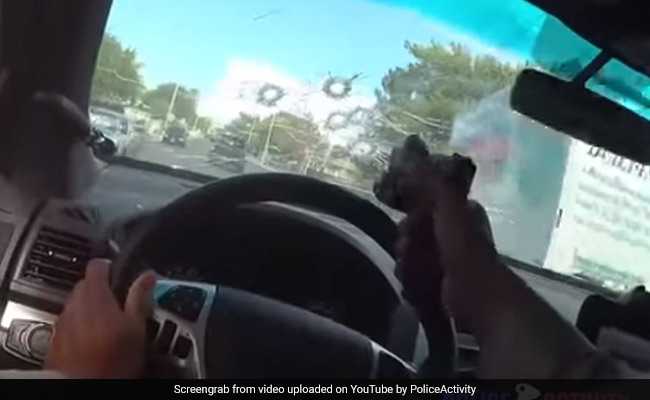 Department investigators are probing police use of force in the incident.

Las Vegas police on Monday released dramatic body camera footage of an officer firing through his own windshield as he drove in a high speed shootout that left one homicide suspect dead.

The video clip of the incident shows the officer at the wheel grab his gun and pepper his windshield with bullets in a bid to stop the suspect driving ahead.

The chase and shootout, which occurred July 11, came after officers responded to an attempted murder call, police said.

Prior to spraying bullets through the car's front window an officer is heard yelling "shots fired" into his radio.

Officers responded with 32 shots and ultimately surrounded the vehicle.

Miranda was declared dead at the scene while Nunez was taken into custody and treated for an apparent gunshot wound, according to police.

Department investigators are probing police use of force in the incident.

According to local media, Miranda and Nunez were suspected in the shooting of a 25-year-old who died at the hospital after sustaining multiple gunshot wounds to the chest.

Las Vegas last October was the scene of the deadliest mass shooting in recent US history, after a gunman rained bullets from his hotel suite on a concert and killed 58 people.

(Except for the headline, this story has not been edited by NDTV staff and is published from a syndicated feed.)
Comments
United States (US)Las Vegas police officer