Boat Rides and Paraglides an Hour From Nepal Earthquake Epicentre 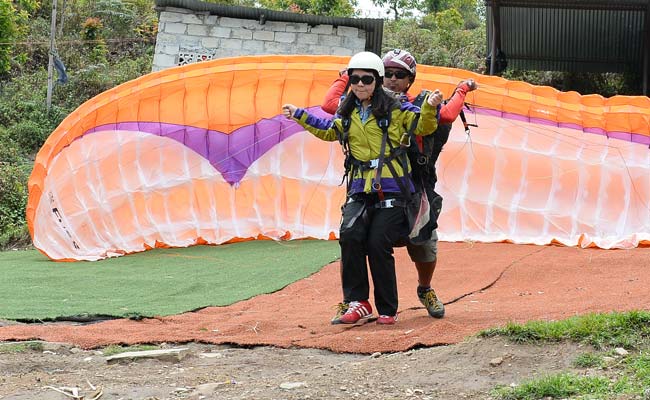 A Paragliding Instructor Prepares for Flight With Chinese Tourist Star Xu Off A High Point in Pokhara. (AFP Photo)

Pokhara, Nepal: For the adrenalin-junkie tourists of Pokhara, just an hour's drive from the epicentre of Nepal's earthquake, it's business as usual with boat trips and paragliding in a town spared the destruction wreaked elsewhere.

Thousands of visitors flock to the picturesque destination every year, attracted by its scenic mountain views, clear, dry winters and abundance of adventure sports, which also include ziplining.

Pokhara sits 73 kilometres (45 miles) east of the epicentre of Saturday's 7.8-magnitude quake, but when AFP visited Monday the only evidence of a disaster that has killed more than 4,000 people, were a few cracked walls.

Two days after the nation's deadliest disaster in more than 80 years, foreigners milled around a scenic valley lake, shopped, ate at cafes and signed up in groups for their next sporting pursuit.

"It was quite scary but to be honest I barely felt it and I only realised what was happening when I saw people around me," said Rick Tul, from the Netherlands, putting on a life-jacket for a boat ride on a Pokhara lake.

"Everything here is great. Of course, you can sense that the locals are tense and worried but otherwise, everything is normal," the 20-year-old told AFP.

According to the US Geological Survey, the epicentre was actually four kilometres closer to Pokhara than the capital Kathmandu, large parts of which have been reduced to rubble.

But New Delhi-based quake expert Milap Chand Sharma said the township, which does not have a large number of high-rises, is most probably located on a solid rock base and not sedimentary material that shifts during tremors.

Pokhara is gateway to the immensely popular trekking circuit around the Annapurna mountain range, which was hit by a snowstorm last October that killed more than 40 people.

Climbers on Annapurna mountain itself were reporting on social media a need for helicopter evacuations.

"Got back to camp four to sleep for a little while, an avalanche hit us. Just... buried us in our tents, had to use our knives to cut our way out," Canadian climber Al Hancock said by phone, a transcript of which was posted on his Facebook page.

But tourism department chief Tulsi Gautam told AFP that no casualties have been reported on Annapurna, adding "climbers are there but they are safe".

Irish tourist Caroline Ahern, 26, described the moment the quake hit, as feeling like "being on a boat".

"The earthquake didn't do any real damage here per se, but people were really panicked. It was really loud, the windows were shaking, people ran out of their buildings with their children," Ahern added as she strapped on her paragliding gear before setting off a cliff.

Some 70 kilometres away in Gorkha district, a village of nearly 2,000 people was almost wiped out by the earthquake, according to locals.

But in Pokhara, AFP saw shops and businesses running as normal. Only schools were shut for five days after strong tremors and aftershocks on Sunday.

Pokhara wasn't spared completely though. Some homes were destroyed and there were injuries, with more than 50 people admitted to a local hospital.

Dutch traveller Mariana Hoake said she was in Kathmandu when the quake struck before leaving for Pokhara to escape the devastated capital which now lies in ruins.

"It was terrible. I stood still and saw the temples and buildings I had just visited crumble before my eyes. It was just unbelievable," the 51-year-old told AFP.

Promoted
Listen to the latest songs, only on JioSaavn.com
"I couldn't stay there any longer since everything was down. There was no electricity or phone connection, so I left for Pokhara. Thankfully, this was untouched," she added.

"Pokhara is peaceful, nothing compared to Kathmandu after the quake. Here, everything is normal - people are back to work, kids are playing around, there's power, Internet, everything."