Blocks From White House, A Freezing Tent Is Home

In the past five years Washington, DC's homeless numbers have "increased dramatically," says Kate Wiley, marketing and communications manager of the non-profit group So Others Might Eat (SOME). 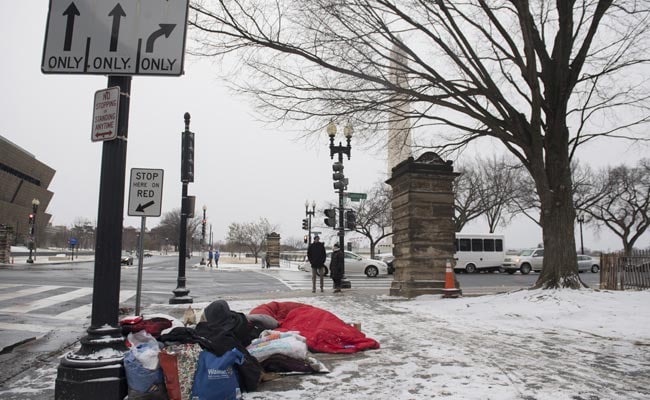 With temperatures around 20 F (-7 C) outside, SOME opened its dining room for the needy.

Washington: Two sleeping bags and "many blankets" are not enough to keep Jin Yang-Hun comfortable in the pup tent in which he lives just blocks from the White House.

Yet Jin isn't going anywhere, even as dangerously cold wind chills are forecast to sweep across the eastern United States this weekend.

Jin, a US citizen originally from South Korea, is among almost 7,500 homeless people in the United States capital.

Many stay in emergency shelters but some like Jin prefer to live outside even in below-freezing temperatures.

Scattered on sidewalks in the city's business and university district, the tents are an incongruous site which the city's more fortunate pass on their way to offices, bars and restaurants.

In the past five years Washington, DC's homeless numbers have "increased dramatically," says Kate Wiley, marketing and communications manager of the non-profit group So Others Might Eat (SOME).

She thinks Washington's numbers are the highest per capita in the country, and cites the lack of affordable housing as a major cause.

"It's very hard for people to be able to afford rent if they're not making really high salaries," says Wiley.

SOME, among numerous charities helping the poor in one of the world's wealthiest societies, offers a range of services including job training, housing for about 1,000 people, and a dining room that serves daily breakfast and lunch for hundreds.

With temperatures around 20 F (-7 C) outside, SOME opened its dining room all morning on Friday to give the needy a warm place to gather and watch a movie, its sound blaring in the packed hall.

"It's so cold outside, obviously we don't want people to be outside any longer than they have to be," Wiley says.

Holding about 100 people at a time, the dining hall has a warm feel. A Christmas tree stands at one end of a faux-brick wall decorated with seasonal bells proclaiming "joy" and "hope."

There is a painting of slain civil rights icon Martin Luther King Jr on another wall, and cool jazz music plays as the diners file back in for lunch.

Wearing tuques and winter jackets, some bring suitcases and bags.

They take their places at rows of tables set with red cups which patrons hold up to signal for a refill of piping hot coffee.

One woman yells, to nobody in particular. Others joke loudly at the tables, or just sit silently. A couple of men read donated books.

In the kitchen, a huge flame burns under a giant pot as volunteers from a local church prepare the meal: steaming plates of chicken casserole, green beans, bread rolls, chocolate brownies and apple sauce.

"Can't complain," says Charles Jackson, 43, when asked about the food.

Eating quietly, he says he worked as a lead carpenter until being laid off last August after 20 years in construction.

Rent became too expensive where he lived, but he has avoided turning to the street and is temporarily staying at a recreation center while he applies for jobs and hopes to get into transitional housing.

"This is the longest I ever been unemployed," he says, a bag of donated clothes and books beside him.

Wiley says that with the temperature so low, city authorities have taken extra measures including opening additional shelters such as gymnasiums.

"Shelters are dangerous. Shelters are full of drug people... terrible. HIV patients," says Jin, who has lived on Washington's streets since 2009, and before that was homeless in New York -- where it was even colder.

"There are some people that just don't trust shelters," Wiley says.

Across town, within sight of the US State Department, a type of tent city has sprung up on a patch of snowy dirt.

Two brothers, Mark and Tommy Taylor, are warming themselves over a fire they started in a donated drum outside their hut. It is a tent fortified with a canopy and tarpaulin, furnished with a love seat and warmed by a propane heater that someone gave them.

"I keep ending up homeless 'cause I got a mental illness that has played havoc with me all my life. So I've had a hard time keeping jobs."

But finally, he and Tommy, who just got out of jail, have realized their dream.

"We just got an apartment," thanks to the help of community activists working with the homeless, says Mark.

"We're supposed to be movin' this afternoon."

Just in time, says his brother.

Promoted
Listen to the latest songs, only on JioSaavn.com
"It's gonna be real cold tonight."