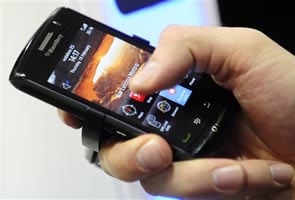 Jakarta: A threat by Indonesia to curb BlackBerry smartphone services unless the company filters pornographic sites prompted a wave of angry protests online.

The row is the latest in a series of controversies that BlackBerry maker Research in Motion (RIM) has found itself in, as a number of governments have complained about difficulties monitoring communications via the smartphones.

Communications and Information Technology Minister Tifatul Sembiring has given RIM a two-week deadline to block access or risk restrictions being imposed, according to local reports.

"We have repeatedly asked them to do it and we have given them some time," Sembiring was quoted as saying by the Jakarta Globe newspaper Saturday.

"If they keep delaying, we will shut down their operation here because they fail to comply with our laws," he added. Details of the extent of any curbs were unclear.

His statement had drawn protests on micro-blogging site Twitter.

"Can you guarantee that the flow of pornography will be reduced after BB is blocked?" user Tiffanywilliam wrote, among many other protesters.

Sembiring, who is from a conservative Islamic party, today told his nearly 149,000 "followers" on Twitter that he was only "executing the laws".

He urged RIM to respect and obey the country's regulations and block pornographic sites.

He also asked RIM to open a representative office and service centre in Indonesia to serve the more than two million BlackBerry users in the country of 240 million people, seen as a major emerging market for information technology and mobile communications.

"So far, it seems that RIM is dragging time in carrying out its commitment. As a nation, do we want to be treated in that way?" he wrote in one tweet.

He also said, "We're not negotiating, if RIM does not comply with the rules and laws of Indonesia, enough is enough!"