"Like The Rest Of Us": Bill Gates Seen Waiting In Line At Fast Food Joint

A picture posted by a former Microsoft employee showed Bill Gates standing in a line outside a fast-food restaurant chain in Seattle, Washington, waiting to get a burger and some fries. 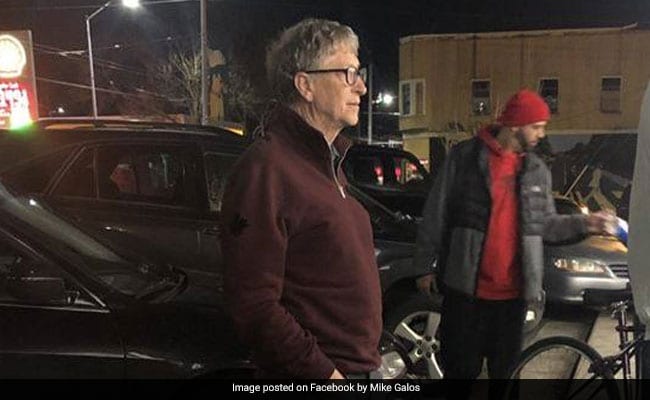 The photo of Bill Gates standing in line has been shared more than 17,000 times on Facebook.

Bill Gates is known to the world as a billionaire businessman, philanthropist and the co-founder of Microsoft with a net worth of $95.6 billion. The internet, however, saw a different, more humble side of the world's second-richest person earlier this week.

A picture posted by a former Microsoft employee showed Mr Gates standing in a line outside a fast-food restaurant chain in Seattle, Washington, waiting to get a burger and some fries.

"When you're worth about $100,000,000,000, run the largest charity in the history of the world and stand in line for a burger, fries and Coke at Dick's like the rest of us," Mike Galos, a Former Program Manager at Microsoft wrote on Facebook.

"THIS is how real rich people behave unlike the gold toilet seat wannabe poser in the White House," he added in an apparent swipe at US President Donald Trump. The post went viral on Facebook and has been shared more than 17,000 times.

#BillGates, worth 95 Billion Dollars, can buy all the burger companies in the world. Yet, he queues for his burger. Whom does he have to impress? pic.twitter.com/a2HMFHQrE4

You don't need swag to prove you're rich, he stand in line like the rest of us, for burger, fries & Coke...that's how real winners behave. This is Bill Gates pic.twitter.com/EAtTUOHUOz

Can you imagine waiting in line for a deluxe and a chocolate shake and the guy standing behind you is bill gates pic.twitter.com/z4jvRjt645

Bill Gates is apparently well-known for his love of burgers and is a regular at Burgermaster, a local burger joint in Bellevue.