Chauntae Davies, 22 at the time, is seen giving massage to Bill Clinton while he sits comfortably on a lounge chair. 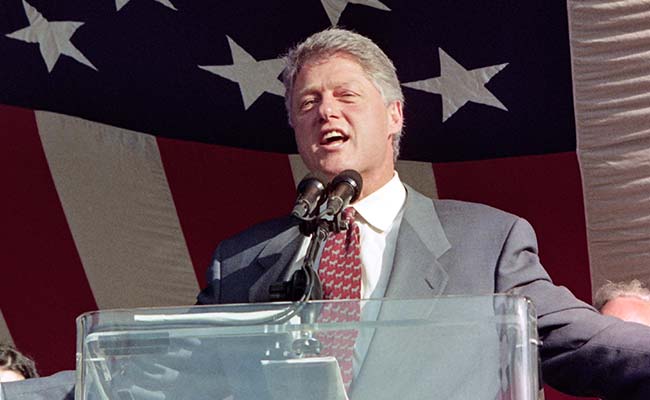 Bill Clinton is seen receiving a massage from Chauntae Davies.

Davies, 22 at the time, is seen giving massage to Clinton while he sits comfortably on a lounge chair.

As per the Daily Mail, Ghislaine Maxwell, the alleged associate of Epstein, had encouraged Davies to massage Clinton as he had complained of having a stiff neck, after falling asleep on Epstein's infamous private jet -- The Lolita Express -- during a humanitarian trip to Africa in September 2002.

In July, Maxwell was arrested and is presently lodged in prison on charges in connection to Epstein's sex trafficking ring.

In one of the images, Clinton is seen dressed in a light yellow-coloured shirt and beige trousers while his hands rest on his lap. Davies, in the same picture, is seen kneeling on a chair behind him to massage him.

Responding to the photographs, Davies, who is presently in her early 40s, reportedly told the Daily Mail, "Although the image looks bizarre, President Clinton was a perfect gentleman during the trip and I saw absolutely no foul play involving him."

Davies, who had accused Epstein of raping her several times after being recruited by Maxwell, said that she was "shocked" to see Clinton boarding the jet and he was "charming and sweet".

"Ghislaine chimed in to be funny and said that I could give him a massage. Everyone had a little chuckle but Ghislaine in her prim British accent insisted and said I was good. The President then asked me ''would you mind giving it a crack," she was quoted as saying by the Daily Mail.

An embarrassed Davies then told Clinton, "I have got a bad angle, would you mind getting on your knees?"

In an excerpt from her soon-to-be-released memoir, Davies said, "I was groggy and have also always been the queen of putting my foot in my mouth."

"For a moment the room fell silent. I could not believe I'd said that. The words just shot out before I realised what I was saying or who I said it to. Then, although his face had turned the colour of fire, he laughed. The whole room was laughing too. And, being the good sport he was, he sat down so I could get a better angle," she added.