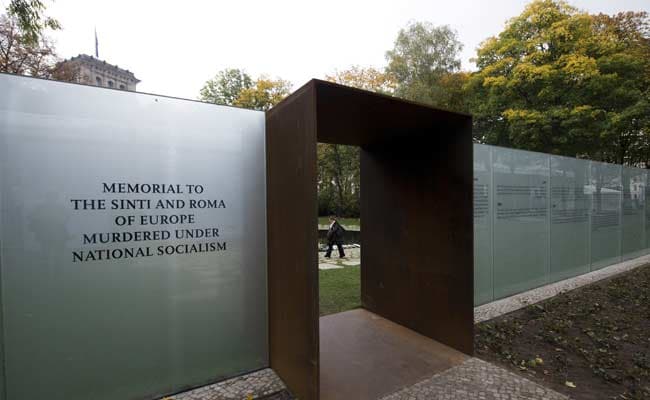 Berlin, Germany: Vandals scrawled Nazi swastikas and the words "gas them" on Germany's memorial to the half million Roma and Sinti murdered by the Nazis, the foundation behind the monument said today.

The head of the foundation, Uwe Neumaerker, condemned the defacement in a statement as an "aggressive anti-Roma" act and said that security had been bolstered at the site, in Berlin's Tiergarten park opposite the Reichstag parliament building.

The graffiti has been removed and state authorities have opened an investigation, he added.

"This is an attack on the reconciliation process," Romeo Franz, a Roma rights activist who composed music for the memorial, said in the statement.

"Seventy years after the genocide, our people still experience exclusion and discrimination in Germany on a daily basis," he said.

The long-delayed monument, a round pool of water with a stone triangle at the centre, was inaugurated by Chancellor Angela Merkel in Berlin in 2012.

A timeline recounting how the Nazi extermination drive unfolded stands next to the memorial, which after 20 years of wrangling was finally built with a federal government grant.

The Nazis deemed the Roma and related Sinti like the Jews to be racially inferior, and unleashed a systematic campaign of oppression against them.

In 1938 SS chief Heinrich Himmler ordered the "final solution of the gypsy question".

Those caught in the sweep were confined to ghettos, deported to concentration camps and slaughtered. Many were subjected to grotesque medical experiments and forced sterilisation.