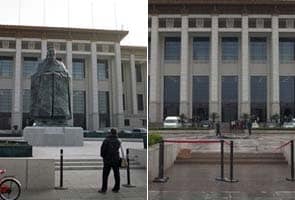 Beijing: The mysterious removal of a statue of Confucius opposite Beijing's Tiananmen Square sparked an online flurry of speculation Saturday by Chinese looking for an explanation. One report says the monument was simply moved inside a nearby museum.

The statue of the 2,500-year-old sage was unveiled just three months ago in the Communist government's most visible endorsement yet of a cultural icon it had once reviled.

On Saturday, it was missing from the pavement on the north side of the recently reopened National Museum of China, with no notice as to where or why it had gone.

Online forums were abuzz with speculation as to its fate. The news portal sina.com quoted a museum staffer saying it had been moved inside to a new sculpture garden. The staffer, who wasn't identified by name, said the statue had been displayed outdoors while the garden was being completed.

Museum officials would not comment and told The Associated Press that no tickets were available Saturday to go inside and check. A woman who answered the phone at the office responsible for the district encompassing Tiananmen Square said she had no information on the statue and told reporters to call back Monday.

The 31-foot (9.5-meter) bronze sculpture of a robed Confucius had sat just northeast of Tiananmen Square roughly facing a massive portrait of Mao Zedong, founder of China's Communist regime, hanging from famed Tiananmen Gate at the entrance to the Forbidden City.

Confucius was at the center of Chinese civilization for nearly two millennia but was widely denigrated by Mao, who railed constantly against traditional culture and what he called "feudal thinking."

Thirty-five years after Mao's death, the statue's appearance was seen as proof of Confucius' rehabilitation as an underlying ideology for a society that has largely discarded communist ideology, even as it retains the one-party Leninist political system.

While the statue's new location could not be verified, Internet users speculated as to whether its removal had been planned all along, or had been prompted by political pressure.

The website maoflag.net favored by hard-core Maoists critical of China's pro-market leadership, heralded the statue's removal as a sign of the government giving way to popular sentiment against building up ideological rivals to the foreign leader.

Promoted
Listen to the latest songs, only on JioSaavn.com
"Dump Confucius into the sea! Mao's words are loved because he cared for all of the people, not just the elite," said one comment on the site signed "Leftist."