The missiles launched into the South China Sea on Wednesday included the DF-21D and DF-26B, the South China Morning Post reported, citing a person close to the People's Liberation Army. 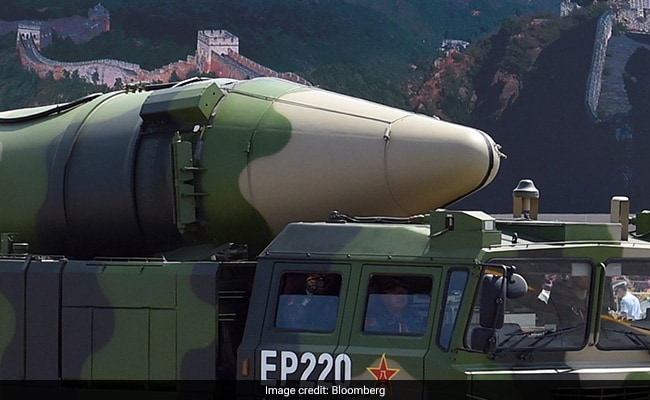 China's latest volley of missile launches into the world's most hotly contested body of water served as a warning to two key U.S. targets: aircraft carriers and regional bases.

The missiles launched into the South China Sea on Wednesday included the DF-21D and DF-26B, the South China Morning Post reported, citing a person close to the People's Liberation Army. Those weapons are central to China's strategy of deterring any military action off its eastern coast by threatening to destroy the major sources of U.S. power projection in the region.

"China is signaling to the U.S., its allies and partners that China has an answer to America's aircraft-carrier strike groups, an answer that is always available and not dependent on deployment schedules," said Carl Schuster, an adjunct faculty member of Hawaii Pacific University's diplomacy and military science program and a former operations director at U.S. Pacific Command's Joint Intelligence Center. "In effect, China is saying, 'If the U.S. puts two carriers in the South China Sea, we send aircraft carrier-killer missiles there.'"

The launches show the U.S. the growing cost of any armed conflict, with a high-profile reminder of China's increasing arsenal of medium- and intermediate-range ballistic missiles. President Xi Jinping rolled out the new PLA Rocket Force as part of a massive military parade in October, showcasing a capability that is challenging American military superiority in Asia for the first time since World War II. Researchers at the University of Sydney warned last year that Chinese missiles could wipe out U.S. bases in the "opening hours" of any conflict.

A U.S. defense official who asked not to be identified told Bloomberg News that China fired four medium-range ballistic missiles during a series of military exercises this week. They landed in the sea between China's southern Hainan Island and the disputed Paracel chain near Vietnam, the official said, not far from where U.S. carriers conducted drills in recent weeks to back up the Trump administration's decision to challenge Beijing's sovereignty claims.

"Conducting military exercises over disputed territory in the South China Sea is counterproductive to easing tensions and maintaining stability," the Pentagon said in a statement Thursday. China's "actions, including missile tests, further destabilize the situation in the South China Sea."

The Chinese Defense Ministry reiterated its contention that the exercises weren't directed at any one nation Thursday, without mentioning the missile launch. Still, ministry spokesman Senior Colonel Wu Qian accused "some U.S. politicians" of trying to provoke a conflict between the two nations, telling a briefing in Beijing that China was "not afraid." 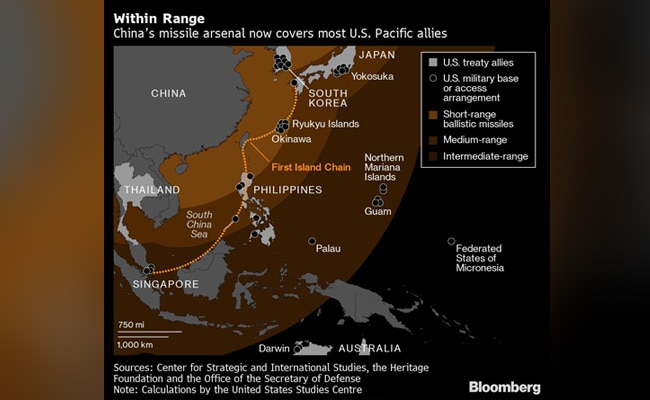 On Thursday, China's military issued a statement saying it expelled a U.S. Navy guided-missile destroyer that "trespassed" into waters near the Paracel Islands. "We urge the U.S. to stop this kind of provocative acts, to strictly manage maritime and air military operations and strictly restrain its frontline troops, so as to avoid accidents," said Li Huamin, a spokesperson for the Chinese army's Southern Theater Command.

The missile tests appeared intended for U.S. consumption, rather than a domestic audience, with coverage on the country's heavily censored internet largely limited to foreign media reports. Earlier this week, China protested an American U-2 spy plane's flight near the exercise zone in the East China Sea, presumably to glean intelligence about the country's capabilities.

"The aim is to test the capability of the troops," said Li Jie, a Beijing-based naval expert, who stopped short of confirming the missile test. "You could say it is sending a warning to the U.S., as the U.S. has increased its military activities in the South China Sea."

While the two nuclear-armed powers have many incentives to avoid a clash, the risk of escalation is growing as the U.S. and its allies seek to push back against a more assertive Beijing. The U.S. has in recent weeks carried out a series military exercises around the region and approved a landmark fighter jet sale to Taiwan -- against the backdrop of a national election President Donald Trump has attempted to focus on China.

The U.S. Navy's recent exercises in the South China Sea have included joint operations by the USS Nimitz and USS Ronald Reagan carrier strike groups last month and separate drills by the Reagan this month. Those moves followed Secretary of State Michael Pompeo's July 13 announcement clarifying U.S. legal opposition to Chinese claims over most of a vital shipping lane, parts of which are also claimed by Brunei, Malaysia, the Philippines, Taiwan and Vietnam.

The real risk is a U.S.-China conflict over Taiwan escalating to nuclear war, in part because the DF-26 can be armed with both nuclear and conventional warheads, said Jeffrey Lewis, director of the East Asia Nonproliferation Program at the Middlebury Institute of International Studies in California.

"If the U.S. were to see DF-26 missiles mobilizing to strike U.S. aircraft carriers, the president would have to order strikes against missile bases throughout all of China, not just coastal areas," Lewis said. "The United States would likely be striking China's nuclear forces. It would be very hard to keep such a conflict limited."

China launched at least one other DF-26 missile in recent weeks, in what the Communist Party's Global Times newspaper characterized as a response to the U.S. carrier operations. The paper had earlier touted its "carrier-killer" missiles on Twitter -- drawing a terse rebuttal from the U.S. Navy, which noted that the warships were nonetheless "still there."

Although China has yet to prove the ability to sink a moving warship, the cost of losing a $10 billion aircraft carrier, the troops and hardware on board -- and all the American military prestige they represent -- would be immeasurable. That threat is causing Pentagon planners to consider less conspicuous ways of projecting force, with an internal Defense Department study recommending reducing the country's carrier fleet to nine from 11 now, Defense News reported in April.

The PLA's missile arsenal is among the many factors driving the U.S.'s shifting security posture in Asia, with the Pentagon cycling B-1 bombers to and from Guam, where they're more vulnerable to attack. Concern about the threat also contributed to the U.S.'s decision to withdraw from the Intermediate-Range Nuclear Forces Treaty with Russia and seek three-way arms talks with China.

Even before this week's launches, China had quietly ramped up tests of ballistic missiles, in an apparent attempt to gauge their operational capabilities. The country fired off in excess of 100 ballistic missiles last year, more than three times North Korea's record tally, Kyodo News reported in February, citing people familiar with the matter. 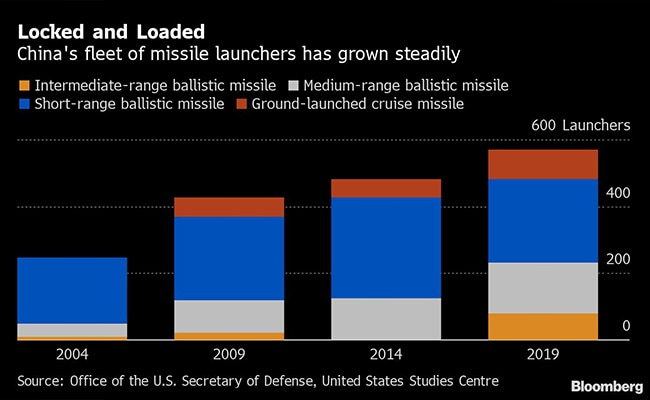 China possesses what former Pacific Commander Harry Harris has called "the largest and most diverse missile force in the world," with scores of different weapons in development. The DF-21D can travel more than 1,500 kilometers (900 miles), while the DF-26 can deliver warheads an estimated 4,000 kilometers, far enough to reach Guam.

There are "real questions" about whether China's carrier-killers actually work, said Ankit Panda, a Stanton senior fellow with the Nuclear Policy Program at the Carnegie Endowment for International Peace. The latest tests may provide the U.S. a chance to better understand their performance.

"The People's Liberation Army Rocket Force has a busy testing schedule and this was likely operational training," Panda said. "But certainly it'll be a reminder to folks in Washington that China's military continues to modernize and can deny access to the U.S. Navy in parts of the Asia-Pacific."