Before The Final Shootout, Four Mysterious Hours In San Bernardino 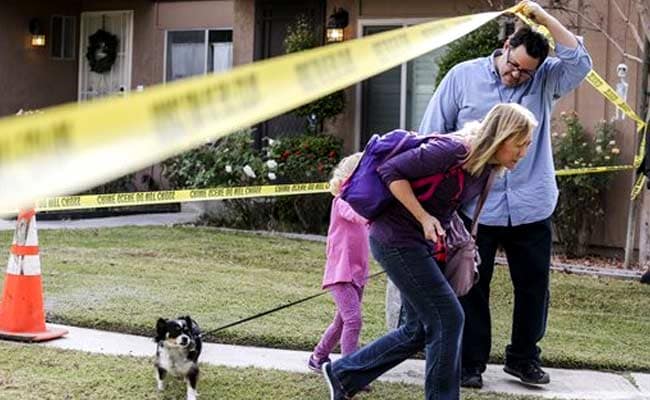 The neighbourhood of San Bernardino is still questioning the mystery of four hours between the 11 a.m. terrorist attack and the 3 p.m. gun battle. (Assocaited Press)

San Bernardino, California: Suu Ngo, 75, served as a major in the South Vietnamese army during the Vietnam War and ended up working lawn maintenance here in the Inland Empire, with a modest home behind a metal fence that lines a quiet stretch of San Bernardino Avenue. On Monday, Ngo stood out in front of his home and counted the bullet holes and marks from the big gun battle of Dec. 2.

Just a few steps from his driveway, Syed Rizwan Farook and Tashfeen Malik, the husband-and-wife terrorists who killed 14 people earlier that day, met their end in a torrent of police gunfire.

The officers were lined up behind a wall in the yard of one of Ngo's neighbors and fired at Farook and Malik's rented black Ford Expedition. Farook bolted from the car and died across the street, while Malik kept firing from the back seat until the police fusillade killed her. The final shootout involved 23 officers who fired 380 bullets, while Farook and Malik fired 76, officials have said.

The killers left behind a long rash of questions, not the least of which is the mystery of the four hours between the 11 a.m. terrorist attack and the 3 p.m. gun battle.

Authorities have not released any information on what Farook and Malik were doing in those four hours. But a law enforcement official said on Monday that investigators do have some information about where the shooters were. The official would not provide specific details other than to say that it involved the use of cellphone data.

Just before the attack, Malik went on Facebook and declared, on behalf of herself and Farook, allegiance to the leader of the Islamic State, officials have said. The shooters apparently smashed their cellphones later and disposed of them. But law enforcement officials have technologies that can triangulate the location of suspects based on where and when a device connects to cellphone towers.

Some rental-car companies have tracking technology on their vehicles, but authorities have not indicated that they have such data in this case.

Law enforcement sources have speculated that Farook and Malik originally intended to shoot up a school or a college. Officials have been quoted in multiple media reports saying that Farook's digital trail included images of schools, but cautioned that this might have been simply part of his job as a county health inspector.

What's striking is the couple's movements in their final, mad dash when chased by police.

The police were tipped, soon after the mass shooting at the Inland Regional Center, that Farook had been at the training session there that morning and had left roughly 20 minutes before two masked killers came into the room and started firing. Police then staked out Farook's rental apartment in Redlands, which is about seven miles by car from the IRC.

The Los Angeles Times, in a reconstruction of the chase and gun battle, reported that several hours after the massacre, two plainclothes detectives saw a black SUV do a slow drive-by of the apartment.

Police had been searching for a black SUV for hours. Multiple officers, led by one from the Redlands police department, pursued the SUV on the Interstate 10 freeway, going west - back into the city of San Bernardino.

Then the SUV, with Farook driving, exited the freeway at Tippecanoe Street, going north. Tippecanoe is the last exit prior to Waterman Avenue, which is where the IRC is located and which had been blocked off by police. The SUV reached San Bernardino Avenue and turned back to the east.

The movements are enigmatic, but it is possible that the terrorists contemplated returning to the scene of their earlier atrocity. Hundreds of first responders had gathered there, along with members of the media. The second attack might have been at the same location as the first one - a kind of suicide mission meant to inflict maximum casualties and add to the list of victims many people who wear a uniform.

Until the FBI, which is running the investigation, provides more information to the public, the movements of the terrorists in those four hours will remain mysterious. But in the meantime, there is mounting evidence that Farook and Malik were hardly criminal masterminds.

In addition to the most obvious mistake - returning to the home where they lived with their baby and Farook's mother, and being seen by the stakeout - the killers struggled with their gear.

Authorities say they tried to make one of their military-style semiautomatic rifles fully automatic - converting it into a machine gun. They failed. They assembled a pipe bomb and left it at the conference room, among the bodies of their victims, but authorities described the remote-control device they hoped to use as a "toy" remote and said it proved to be a dud.

They tried to cover their digital tracks, smashing two cellphones. But they apparently threw them into a trash can near their home, and they were quickly found and are being examined by FBI forensic researchers.

The FBI believes that they tried to dispose of a computer hard drive and other items by throwing them into a pond in a park about two miles from the massacre. Divers retrieved material that is now being examined as possible evidence in the case.

Authorities do not yet know the scope of the conspiracy to carry out the terror attack, or even if anyone other than Farook or Malik knew about it. Enrique Marquez, a 24-year-old neighbor of Farook's who bought the rifles, has been extensively interrogated but not yet charged with a crime.

Victoria Landeros endured the terrifying gun battle. She was told by her daughter, Rosalind, that there was gunfire outside. Victoria, who has lived in her home for 60 years, called 911.

"Stay indoors! Do not go outside!" the dispatcher told her.

Her house still has a bullet hole in the frame of the living room window. The police had come along after the shooting and given the bullet hole a number: "120."

John Situmeang, 71, who has lived in his home for 22 years and boasts citrus trees loaded with ripe fruit at this time of year, said Monday that on Dec. 2 he and his wife had just finished lunch when the gunfire erupted. They saw police cars line up along their side yard. They lay down on the carpet in their living room, trying to make themselves as flat as possible.

"Even now, I'm scared - if I hear helicopters or police," he said.

Crime tourists drive by the scene and stop to look around. The asphalt has been treated in the place where the SUV stopped and where Farook died.

There are nuggets of automobile glass, but no sign of blood. Police have collected the bullets and shell casings. Ngo said he's contacted his insurance company about the bullet-riddled fence.