The country's Koala populations have been a major victim of the flames, with more than 350 of the Marsupials feared killed in a major habitat. 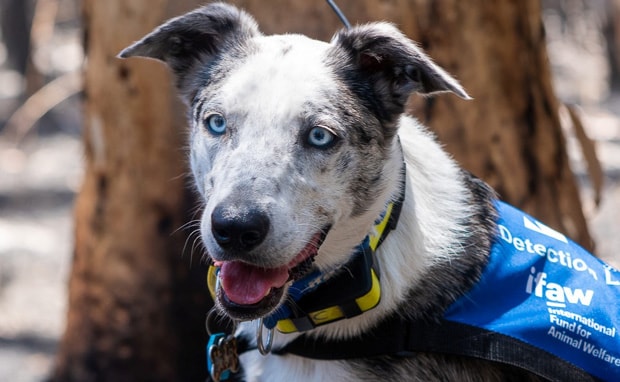 Bear is trained to find both Koalas and Quolls. (Reuters)

An obsessive compulsive dog who was abandoned as a puppy has a new mission: helping find and save Koalas injured in Australia's recent devastating bushfires.

Bear, a Cattle Dog cross-breed, is trained to find both Koalas and Quolls, another small Australian Marsupial, in the wild.

"This is the first year that we have been involved in the fires," Romane Cristescu, his minder and ecologist at The University of the Sunshine Coast, told Reuters. "It is a bit more dangerous than what we usually do."

Bear, who usually looks for sick or injured wildlife for conservation and research purposes in calmer conditions, has been wearing protective socks on his paws to search through areas scorched by fire.

The country's Koala populations have also been a major victim of the flames, with more than 350 of the Marsupials feared killed in a major habitat.

Sponsored by the International Fund for Animal Welfare (IFAW), Bear has found dozens of koalas in need and for research purposes so far this year, but is yet to find any since starting his bushfire deployment earlier this month.

"With climate change, habitat loss and diseases, koalas are just facing too many threats," Mr Cristescu said. "Those fires are just one of the many things threatening them so we really need to be better at protecting them."