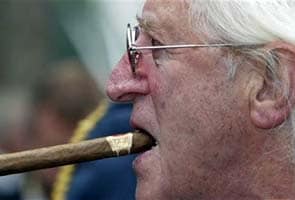 London: The head of Britain's BBC told hostile lawmakers on Tuesday that allegations of sexual abuse against one of its former stars were a grave matter but denied bosses had tried to cover up one of the biggest crises to hit the publicly funded broadcaster.

"This is a gravely serious matter and one cannot look back at it with anything other than horror," General Director George Entwistle told lawmakers on parliament's Culture and Media Committee.

The British broadcaster is facing one of the biggest crises in its long history over accusations it axed its own investigation into sexual abuse by former presenter Jimmy Savile as part of a wider cover-up.

While Savile was little known beyond Britain, the eccentric, cigar-chomping one-time DJ he was one of the most recognised personalities on British television for decades, hosting prime-time shows.

Mr Entwistle, who only took charge at the 90-year-old media organisation in August, appeared before the committee just a day after Prime Minister David Cameron said the BBC had serious questions to answer.

Police are investigating allegations that Savile, once one of Britain's most celebrated TV stars who died last year, abused women, including girls as young as 12, over a 60-year period with some of the attacks taking place on BBC premises.

Looking generally composed, Mr Entwistle told the lawmakers the BBC had taken longer to address the growing crisis than it should have but had been at pains to avoid causing any damage to the police investigation.

Asked if it was likely that sexual abuse of children and young women had been widespread at the BBC, he said: "I don't yet have enough of a picture to know whether it was endemic.

"The key question for me is what was the extent of it and the only possible way to go about answering that question is to look as deeply and broadly as we would have to do to find out."

Police opened the criminal inquiry into the allegations on Friday, saying more than 200 potential victims had come forward.

Mr Entwistle, whose predecessor Mark Thomson is the New York Times Company's incoming chief executive, and other managers have come under pressure to explain why rumours about Savile were not investigated at the height of his fame in the 1970s and 80s.

But far more damaging are suggestions an investigation into the alleged sex crimes by the BBC's flagship "Newsnight" show was pulled a couple of months after Savile's death in October 2011 because it would clash with planned Christmas programmes celebrating his life and charity work.

The editor of "Newsnight" stepped aside on Monday after the BBC said he had given an "inaccurate or incomplete" explanation of why his team's inquiry was dropped, prompting Mr Cameron to voice concern that it appeared the BBC was changing its story.

The furore over Savile is the biggest controversy to surround the BBC since its director general and chairman resigned in 2004 after a judge-led inquiry ruled it had wrongly reported that former Prime Minister Tony Blair had "sexed up" intelligence to justify the 2003 invasion of Iraq.

It comes as British newspapers await the recommendations of a separate wide-ranging inquiry into journalistic ethics following the phone-hacking scandal at Rupert Murdoch's now closed News of the World tabloid.

"If there was corporate jiggery pokery and I'm saying 'if' as there's no reason to believe there was, then George is at the heart of it," Steve Hewlett, a media consultant and former BBC editor, said.

"Were it to emerge that Newsnight had been tinkered with because of corporate interests then that would be a disaster."

At the time of the Newsnight investigation, Mr Entwistle was head of BBC Vision, which oversees BBC television's commissioning and programming.

Panorama said the BBC's head of news, Helen Boaden, had briefly told him in December about the programme's investigation and that as a result he might have to change his Christmas programming schedules, which included Savile tributes.

Neither Ms Boaden nor Mr Entwistle provided responses to Panorama about the conversation, the BBC said.

The BBC has launched two independent reviews of the allegations, but Mr Entwistle will face scrutiny from lawmakers as to why his organisation has apparently put out partial or misleading information since rival channel ITV first aired the accusations against Savile at the end of last month.

But former colleagues have now come forward to say there had been rumours for years involving young girls and Savile, famous for his garish outfits and long blonde hair, and later knighted by Queen Elizabeth for his charity work.

Other BBC employees have talked of a culture at the corporation where women were groped and have hinted that Savile was not the only household name to have been involved.

"The whole Savile business is certainly one of the worst (crises) because Savile became what he became because of the BBC and he appears to have abused BBC premises and programmes and staff to cover his tracks at the very least," Mr Hewlett said.

Promoted
Listen to the latest songs, only on JioSaavn.com
"That's very difficult for the BBC who depend on the trust and affection of licence payers for their existence really. Anything that undermines or damages that is serious."

Paid for by a yearly levy of 145.50 pounds on all British households with a colour TV, critics have queried whether such this licence fee funding arrangement should continue when some private media companies are struggling.
© Thomson Reuters 2012