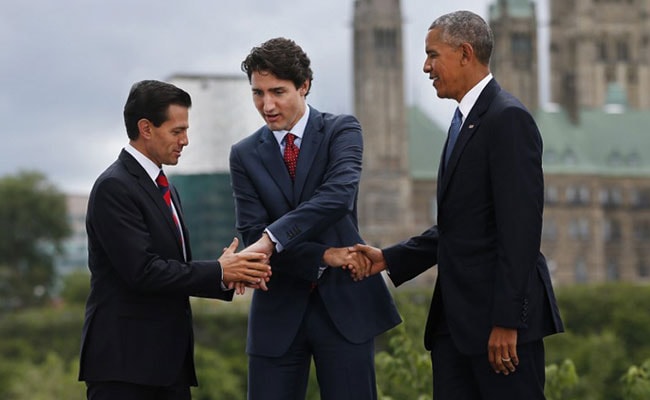 Ottawa, Canada: The leaders of the United States and Mexico warned against isolationism at a summit in Ottawa on Wednesday, making a pitch for unity as Donald Trump calls into question the free trade agreement that has bound them together with Canada for two decades.

"All too often we're hearing rhetoric that ignores the enormous contributions that have been made by Mexican Americans and the enormous strengths we draw from the relationship," Obama said, without naming the Republican billionaire who hopes to succeed him as president.

At the start of the so-called "Three Amigos" summit hosted by Canadian Prime Minister Justin Trudeau, Mexican President Enrique Pena Nieto offered a clear warning: "Isolationism is not a road towards progress," he said.

"We are neighbors, we are friends," he added, announcing that he would soon visit the White House. "This friendship is based on strong cooperation and teamwork."

On Tuesday, Trudeau urged people to resist the temptation of "turning inward," warning of the high economic cost for nations that choose to go it alone.

Trump has promised to build a wall on the US border with Mexico to stem the flow of illegal migrants into the United States, and rails regularly against the North American Free Trade Agreement (NAFTA) signed by his rival Hillary Clinton's husband Bill when he was president.

In a speech in Pennsylvania on Tuesday, Trump said he intended to renegotiate the 1994 accord that unites 530 million consumers and represents more than one-quarter of the world's gross domestic product (GDP).

"If (Canada and Mexico) do not agree to a renegotiation, then I will submit notice... that America intends to withdraw from the deal," he began.

While arguing for greater North American integration as the key to the continent's economic prosperity, Trudeau also warned of a growing backlash against globalization and rising protectionism.

The three nations at the Ottawa summit also announced a collaborative strengthening of their efforts to fight climate change.

The aim is to produce 50 percent of the continent's overall electricity from "clean energy," including from solar and wind, nuclear and hydroelectric generation, by 2025. 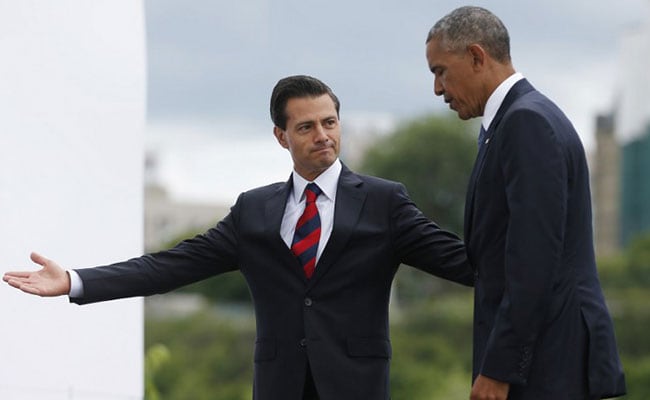 Mexican President Enrique Pena Nieto and US President Barack Obama leave after a group photo during the North American Leaders Summit. (AFP Photo)
"The Paris Agreement was a turning point for our planet, representing unprecedented accord on the urgent need to take action to combat climate change through innovation and deployment of low-carbon solutions," the leaders said in a joint statement calling for the accord to come into force before the end of the year.

Mexico also joined an existing commitment by the United States and Canada to reduce emissions of methane, a potent greenhouse gas, by 40 to 45 percent by 2025, compared to 2012 levels.

The Ottawa summit comes as the shockwave from Britain's vote to leave the European Union reverberates on both sides of the Atlantic.

Both Obama and Trudeau had made clear their desire to see Britain remain in the 28-member bloc and the fallout from the Brexit was on the agenda on Ottawa.

"We'll be eager to talk about what it means for us and how we can coordinate our efforts," Mark Feierstein of Obama's National Security Council said ahead of the talks.

The US leader, who was to address Canadian lawmakers after the three-way summit, had warned against this very result during a trip to London in April.

But for the Obama administration, any comparison between Europe's woes and North America is irrelevant.

"Countries in North America have pursued a different strategy, and one that has worked well for us," White House spokesman Josh Earnest said.