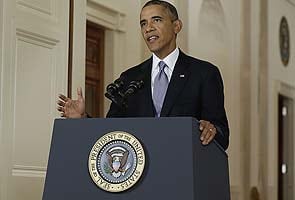 Washington: President Barack Obama used a nationally televised address to make his case for military action against Syria, even as he recognized that diplomatic steps could render attacks unnecessary. He told war-weary Americans that the use of chemical weapons poses a threat to U.S. security and that America, with modest effort, "can stop children from being gassed to death."

Citing the new diplomatic efforts, Obama said in his speech Tuesday night that he had asked congressional leaders to postpone a vote on legislation he has been seeking to authorize the use of military force against Syria - a vote he was in danger of losing.

In the interim, Obama said he has ordered the U.S. military to remain prepared to carry out attacks if needed, maintaining a credible pressure on Syrian President Bashar Assad. Directly addressing criticism over his own vow of limited strikes, Obama said some lawmakers have said "there's no point in simply doing a pinprick strike in Syria."

"Let me make something clear: The United States military doesn't do pinpricks," the president said. "Even a limited strike will send a message to Assad that no other nation can deliver."

He blamed the chemical weapons attack squarely on Assad and warned that a failure to act now would encourage tyrants and terrorists to use similar weapons.

"Our ideals and principals as well as our national security are at stake in Syria, along with our leadership of a world where we seek to ensure that the worst weapons will never be used," he said.

Obama's speech was seen as a critical one for his presidency, though for reasons different than when plans for it were announced last week. It was intended as the climax of the administration's pitch to persuade Congress to endorse military action in Syria. Polls showed that Americans, wary of another Middle East conflict, oppose the strikes. Lawmakers from both ends of the political spectrum declared they would vote against the measure.

Syria's announcement this week that it would accept a Russian plan to turn over the chemical weapons stockpile added new uncertainty. Obama's speech was closely watched for signs of how much stock he put in prospects for a diplomatic breakthrough.

He did recognize some potential. Obama noted he was sending his top diplomat, Secretary of State John Kerry, to Geneva for talks Thursday with Russian Foreign Minister Sergey Lavrov. He said he would continue his own discussions with Russian President Vladimir Putin and that the U.S. and its allies would work with Russia and China to secure a U.N. Security Council resolution "requiring Assad to give up his chemical weapons and to ultimately destroy them under international control."

Obama said the Russian initiative "has the potential to remove the threat of chemical weapons without the use of force, particularly because Russia is one of Assad's strongest allies."

But the 16-minute speech generally made the case for military action. His arguments were both practical and emotional.

"If diplomacy now fails and the United States fails to act, he said, "the Assad regime will see no reason to stop using chemical weapons" and "other tyrants will have no reason to think twice about acquiring poison gas and using" it. Over time, he added, the weapons could threaten U.S. troops as well as allies like Turkey, Jordan and Israel.

"America is not the world's policeman," Obama said. "Terrible things happen across the globe, and it is beyond our means to right every wrong. But when, with modest effort and risk, we can stop children from being gassed to death and thereby make our own children safer over the long run, I believe we should act."

The unpredictable chain of events stemmed from a chemical weapons attack in the Damascus suburbs on Aug. 21. U.S. officials say more than 1,400 people died, including at least 400 children, and victims suffered uncontrollable twitching, foaming at the mouth and other symptoms typical of exposure to chemical weapons banned by international treaty. Other casualty estimates are lower, and Assad has said the attack was launched by rebels who have been fighting to drive him from power in a civil war that has so far claimed the lives of more than 100,000 civilians.

Russia has blocked U.S. attempts to rally the U.N. Security Council behind a military strike. But Monday, after a remark by Kerry, Russian officials spoke favorably about requiring Syria to surrender control of its chemical weapons, and the Syrian foreign minister did likewise.

The foreign minister, Walid al-Moallem, said Tuesday that his government was ready to turn over its chemical weapons stockpile in line with Russia's proposal in order "to thwart U.S. aggression." He also said Syria is prepared to implement a Russian proposal to put its chemical weapons arsenal under international control.

On Capitol Hill, lawmakers cautiously welcomed the Russian offer as not only a means to avoid U.S. military involvement but also a way to avoid casting a difficult vote on authorizing the use of force. After a flurry of briefings over the past week, an all-senators briefing scheduled for Wednesday was canceled as events moved quickly.

Republican Rep. Mike Rogers, chairman of the House Intelligence Committee, said he was hopeful that a diplomatic solution could be reached although he remained skeptical of Russia's offer.

Promoted
Listen to the latest songs, only on JioSaavn.com
"A credible threat of military force will have to remain on the table if diplomatic efforts are to have any hope of succeeding," he said.

But Republican Sen. Rand Paul, an outspoken critic of involvement in Syria, said Americans "want nothing to do with the Syrian civil war. We fail to see a national security interest in a war between a leader who gasses his own citizens and Islamic rebels who are killing Christians."