The Obama Presidential Center will feature a hexagonal shaped museum, an athletic center, a forum building, a public plaza, a play area and a branch of the Chicago Public Library. 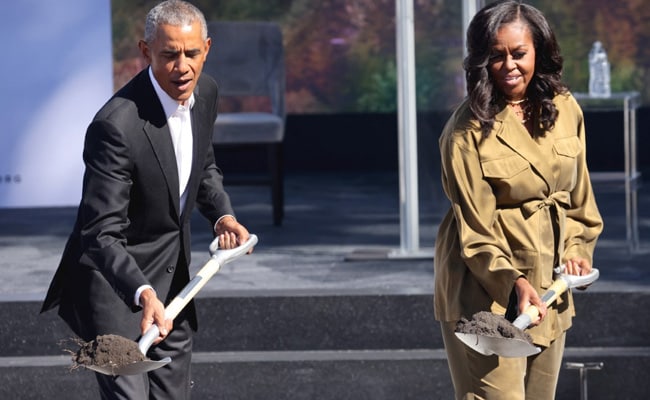 The museum's exhibits will tell the story of Obama's political career.

Barack Obama broke ground Tuesday on his presidential library and center, launching a project he said would produce the next generation of American leaders.

In the ultra-modern architectural project, three buildings will rise up in Jackson Park on the shores of Lake Michigan, in a poor South Side neighborhood of Chicago where Obama got his start in politics as a community organizer and where his wife, Michelle, grew up.

The Obama Presidential Center will feature a hexagonal shaped museum, an athletic center, a forum building, a public plaza, a play area and a branch of the Chicago Public Library.

The museum's exhibits will tell the story of Obama's political career, from his arrival in Chicago to his two terms as the United States' 44th -- and first Black -- president, from 2009 to 2017.

Ex-presidents overseeing the building of libraries bearing their names is a tradition in America. But the Obama Presidential Center aims to be an action-oriented institution that is fully integrated into the socio-economic life of the South Side.

"We want this center to be more than a static museum or a source of archival research. It won't just be a collection of campaign memorabilia, or Michelle's ball gowns, although I know everybody will come see those," Obama said at the ground breaking ceremony.

He said the center will "empower the next generation of leaders, not just in government and public service, but also those who intend to bring about change through the arts, or journalism or want to start businesses that are inclusive, socially responsible, and responsible and responsive to the challenges of our time."

Construction on the center began in August, despite a series of lawsuits against its being built in Jackson Park. No date has been given for when the complex will be completed.