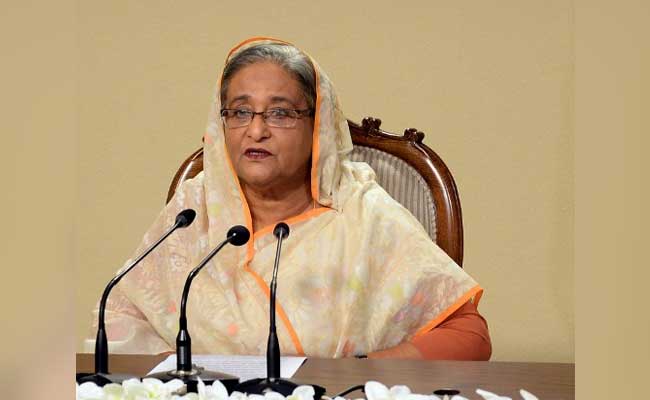 Sheikh Hasina says it is moral responsibility of the Bangladesh to take care of minorities.

"Islam has been kept as the state religion for strategic reasons," the party's Presidium Member and former minister Abdur Razzaq told a roundtable here yesterday.

"I have said it abroad and now I am saying it again that Islam will be dropped (as state religion) from Bangladesh's Constitution when the time comes," the former food minister was quoted as saying by BDNews24.com.

The ruling party leader made the statement while speaking about Bangladesh's secular tradition at the roundtable organised by SAARC Cultural Society at the national Press Club.

Politicians and journalists from India also took part in the discussion titled 'Strong Unity of Masses of Bangladesh and India to Prevent Terrorism', held with the recent attacks on Hindus in Brahmanbarhia in the backdrop.

Highlighting secularism Mr Razzaq said: "The force of secularism is in the people of Bangladesh. There is nothing called 'minority' in our country."

Secularism was included in the Constitution as one of the four basic principles when it was written in 1972 as people from all religions joined the struggle for independence and snatched it from Pakistan.

After the assassination of Sheikh Mujibur Rahman in 1975, Bangladesh's course of direction was reversed, and Zia-ur- Rahman, capturing the power, replaced 'secularism' with 'Absolute trust and faith in the Almighty Allah'.

Another military dictator, HM Ershad, later included Islam as the state religion in the Constitution.

After Mr Ershad's ouster, the demand to drop Islam as state religion from the Constitution was raised several times, but even Awami League, the party that led the struggle for independence, has not made the change.

Through the 15th Amendment to the Constitution in 2011, the four basic principles of the 1972 Constitution - nationalism, socialism, democracy and secularism - were restored, but Islam remained the state religion.

The Awami League leader's comment came at a time when there are protests on the street against the attacks on Hindus and tribal Santal minorities in Bangladesh. Prime Minister Sheikh Hasina yesterday said as a Muslim majority country it is the moral responsibility of the Bangladeshi citizens to take care of minorities.

Promoted
Listen to the latest songs, only on JioSaavn.com
"Bangladesh is a country of communal harmony which should be maintained at any cost for development and brighten the country's image," Ms Hasina said at a video conference. "As a Muslim majority country it is the moral responsibility of all of us to take care of the minorities," she said.

The prime minister added: "You have to remain careful so that no such incidents, which are taking place sporadically in different parts of the country, take place anywhere in the country."