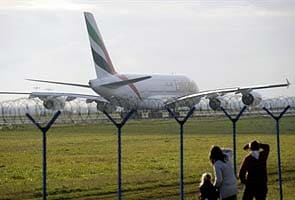 A couple with a small child watches an Emirates Airbus A380 flying from Dubai to Amsterdam sitting on the runway after an emergency landing at Prague's Vaclav Havel Airport. Credit: The Associated Press

Sydney: An engine problem forced an Emirates A380 superjumbo to turn back to Sydney, the airline said on Monday, with passengers hearing a loud bang and seeing a flash of orange.

The pilot of the Dubai-bound Airbus plane carrying 380 passengers made the decision to turn back shortly after take-off on Sunday night.

"Emirates flight EK413 from Sydney to Dubai on November 11 turned back shortly after take-off due to an engine fault," the carrier said in a statement.

"Emirates apologises for any inconvenience caused to its customers. However, the safety of our passengers and crew is of the highest priority and will not be compromised."

Fairfax journalist Matt Campbell was on the plane and told the Sydney Morning Herald the aircraft was still climbing.

"It seemed about half an hour into the flight when I saw a bright orange flash, heard a loud bang and there was a big thump through the cabin," he said.

"The flight attendants were rushing about through the cabin and then eventually the PA came on and the captain said there was an engine problem with engine number three and that engine had now been shut down."

An Emirates spokesman told AFP the carrier was still working on what caused the scare but admitted passengers may have "seen a flash and heard noise".

"There were no flames or smoke," he added, despite some passengers telling local media they saw fire.

"The pilot made a decision to turn back as a precaution."

"Everyone was running left and right (with) no one knowing what's happened." Amal Aburawi, a doctor, told the tabloid, and said non-English speaking passengers were not properly informed about what was happening.

She said usually Arabic announcements followed the English but "this time no one mentioned anything in Arabic and there (were) many Arabic passengers, many of them old ladies."

Qantas, which recently sealed a major partnership with Emirates, had an engine explode on one of its A380s over Indonesia in November 2010.

The accident, during a flight from Singapore to Sydney, led the Australian carrier to temporarily ground its entire A380 superjumbo fleet.

Subsequent investigations pinpointed a manufacturing defect which caused fatigue cracking in an oil pipe, resulting in a fire and potentially catastrophic engine failure.