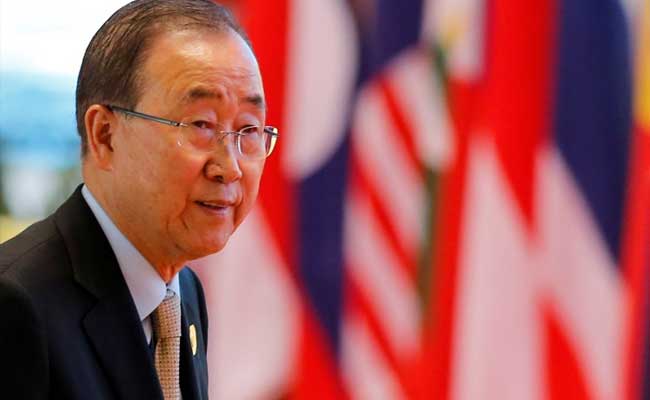 Ban Ki-moon paid an emotional farewell to the United Nations on Friday.

United Nations, United States: UN Secretary Ban Ki-moon paid an emotional farewell to the United Nations on Friday, wistfully describing his two-term stint at the helm of the global body as something of a fairy tale.

"I feel a bit like Cinderella. Tomorrow at midnight, everything changes!" he joked to staff and colleagues as he wrapped up a decade leading the United Nations.

Guterres is the first former head of government to lead the UN, succeeding Ban for a five-year term.

Ban, in a more serious vein, said it has been a "privilege" to have been at the head of an organization that endeavored to tamp down global conflict and end suffering -- and said it was an honor to have shared that mission with his co-workers.

"You should be very proud -- just as I am so very proud to call you my colleagues," the South Korean diplomat said.

He added that in his decade at the UN, he has endeavored "to never give up. To keep dreaming, to keep believing, and to keep working hard until we achieve progress," he said.

Ban added that as UN chief, he also has been guided by a desire "to keep the focus on people -- on people's rights and people's dignity... and to stand up for those who are left behind."

Promoted
Listen to the latest songs, only on JioSaavn.com
As a first act after leaving the pinnacle of global diplomacy, Ban will ring in the new year at Times Square by formally launching the traditional New Year's Eve ball drop, to be attended by hundreds of thousands of revelers.

"Tomorrow night, on the eve of the New Year, I will be in Times Square for the ball drop -- millions of people will be watching as I lose my job!" the outgoing UN leader joked.