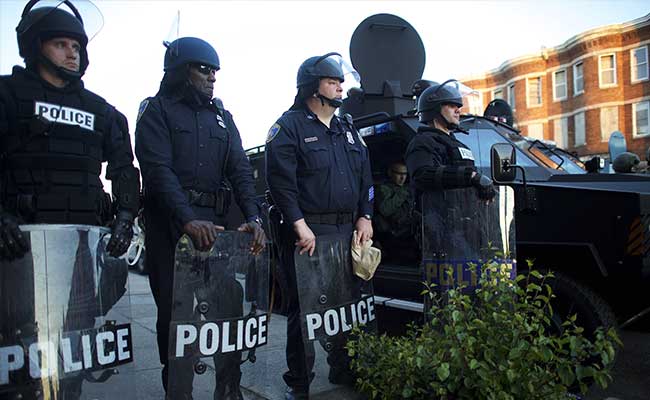 Riot policemen lining the street to form a blockade after citywide riots on April 28, 2015 in Baltimore. (Agence France-Presse)

BALTIMORE: The streets of Baltimore were largely quiet overnight, with only scattered arrests reported during a curfew imposed after the latest wave of rioting fueled by anger against US police killings of black men.

Shortly after the curfew began late on Tuesday night, police in riot gear fired rubber bullets and lobbed gas canisters at a few hundred protesters who stood in front of a pharmacy that had been burned out.

But Commissioner Anthony Batts told reporters around midnight only 10 people had been arrested, adding "The curfew is in fact working."

After the seven-hour curfew ended at 5 am EDT (0900 GMT), schools prepared to reopen after violence flared after the Monday funeral of an African-American man who died April 19 from a spinal injury suffered in police custody a week earlier.

The death of 25-year-old Freddie Gray has renewed a national movement against police use of lethal force, which protesters say is disproportionately exercised against minorities, that flared after police killed unarmed black men last year in Ferguson, Missouri; New York City and elsewhere.

Thousands of police and National Guard troops patrolled the streets of Baltimore overnight, and the curfew was scheduled to remain in place for six more nights.

In a rare move, the Major League Baseball game between the Baltimore Orioles and Chicago White Sox will be played as scheduled Wednesday but closed to the public.

Baltimore, just 40 miles (64 km) from the nation's capital in Washington, saw scenes of reconciliation, cleanup and even celebration, as well as continued protest on Tuesday. The day before, shops were looted, 19 buildings were set on fire, 20 officers were injured and police arrested more than 250 people.

In Chicago on Tuesday, about 500 people demonstrated outside police headquarters and marched in solidarity with the people of Baltimore, chanting "Stop Police Violence." At least one person was arrested, but the event was mostly peaceful.

Local media reported that two people were injured overnight following gunfire in Ferguson, Missouri, during a protest near where unarmed black teenager Michael Brown was shot dead by police last August. It was not clear if the shootings were linked or connected to the demonstration.

Gray was arrested on April 12 after running from officers. He was taken to the police station in a van, with no seat restraint. A lawyer for Gray's family says his spine was 80 percent severed at the neck while in custody.

Six officers have been suspended, and the US Justice Department is investigating possible civil rights violations.

"There's no excuse for the kind of violence that we saw (Monday)," President Barack Obama said. "It is counterproductive."

The rioting followed a week of largely peaceful protests in the city, where almost a quarter of the 620,000 people live below the poverty line, with demonstrators demanding answers in Gray's death.

Police have said they would conclude their investigation by Friday and forward the results to state prosecutors.

Mayor Stephanie Rawlings-Blake said she acted cautiously on Monday to avoid a heavy-handed response that would incite violence.

Promoted
Listen to the latest songs, only on JioSaavn.com
Maryland Governor Larry Hogan, a Republican, said he had called Rawlings-Blake repeatedly Monday but that she held off requesting the National Guard until three hours after looting started. He ended up declaring a state of emergency while she imposed the curfew.

Democratic presidential candidate Hillary Clinton will discuss the violent protests in Baltimore and call for reform in the US justice system, including the use of body cameras by police across the country, in a speech in New York on Wednesday.
© Thomson Reuters 2015