Residents stop daily activities for a day of meditation and introspection, an annual rite that includes beach side ceremonies and demon-like effigies. 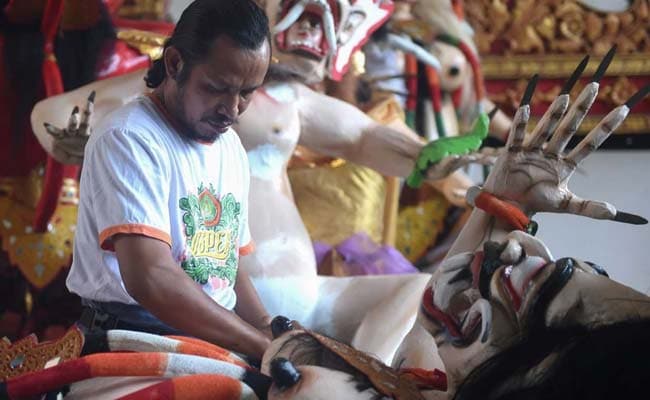 Fffigies which represent demons are paraded in streets and burned to symbolise renewal and purification.

Denpasar, Indonesia: Indonesia's bustling tourist island Bali is set to go quiet with Internet service and flights temporarily halted for a "Day of Silence", while young people get ready to pucker up.

Residents of the Hindu-dominated island stop regular daily activities for a day of meditation, fasting and introspection, an annual rite that includes elaborate beachside ceremonies and demon-like effigies.

Known locally as Nyepi, Hindus on the island are expected to stop all work and play and remain indoors Saturday, while unmarried people kiss each other as residents pour buckets of water over them in a ceremony called Omed-omedan.

Shops and tourist attractions will be closed for the day although public services including hospitals are to remain open.

On Friday, effigies known as Ogoh-Ogoh, which represent demons, will be paraded through the streets before they're burned to symbolise renewal and purification.

In the days leading up to the festival, observers dressed in white perform the Melasti ritual that includes a procession to the beach where they perform ceremonies involving traditional daggers.

Non-Hindus, including the tourists who flock to the tropical paradise, are asked to stay in their homes or hotels.

Cars and motorcycles are not allowed on the road except in the case of an emergency, while lights inside homes and street lights are switched off.

Mobile internet providers have been asked to shut down service, except for essential public services.

"Many tourists actually came specifically to experience the quietness and the serenity of Nyepi," airport spokesman Yanus Suprayogi told AFP.

Promoted
Listen to the latest songs, only on JioSaavn.com
Indonesia is a Muslim-majority country but more than 80 percent of Bali's population identify as Hindu who practice a local version of the religion.

US' "Likely" Move That Could Push Russia Into Debt Default