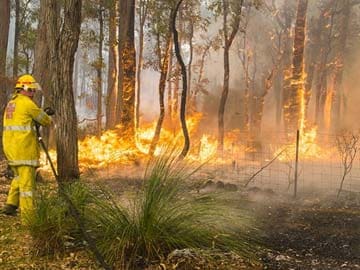 A firefighter works to extinguish a fire in Perth Hills in western Australia. (File photo)

Melbourne: At least 20 homes have been razed in the worst fire conditions Australia has seen since a deadly 2009 inferno which killed 173 people, with flames threatening the country's second-largest city, officials said on Monday.

Hot, dry winds and soaring temperatures fanned scores of major blazes across the southeast on Sunday, with Victoria state sweltering through its worst fire risk weather in five years.

The emergency came exactly five years after the so-called Black Saturday firestorm devastated the state, flattening whole towns in what was Australia's deadliest natural disaster of the modern era.

"There are about 20 homes that have been affected, the exact number will be determined as we get the opportunity for the police to get in and examine those issues directly," he said.

Hundreds of people spent the night in evacuation shelters after being forced to flee their homes.

A major open-cut coal mine was ablaze, with a nearby power station in the path of one fire. Napthine said emergency crews were working "very, very hard in that area to protect those strategic assets".

Four blazes remained at emergency level Monday including a 40-kilometre (25-mile) front on the outskirts of Melbourne, Australia's second city, with tens of thousands of hectares scorched.

Fire crews said they saved about 550 properties from an intense blaze at suburban Keilor, near Melbourne Airport.

"It was very hard for us to initially get that fire to stop due to the fact that the winds were blowing up towards the airport," said Rob Purcell from the Metropolitan Fire Brigade.

"But we had great firefighters who did a brilliant job in saving a huge amount of assets."
'Terrifying' experience

At Warrandyte, also on the outskirts of Melbourne, resident Brenda Ireland described a "huge ball of flames just rushing across our backyard."

Neighbour Jamie Conlon said he "just sprinted" shirtless and without shoes down his driveway, which was flanked by flames.

"I was just screaming. I was terrified."

One man told the Australian Broadcasting Corporation that fast-moving flames had cut off his evacuation route, forcing him to stay and defend his property near Forbes north of Melbourne.

"Amazing how fast it come up the gully and how big the fire front was. It was a massive wall of fire," said the man, who identified himself only as Peter.

"I really didn't think I was going to make it but luckily in our case the fire spread around our house and our shed, went either side of us. And then for a good five, 10 minutes I thought 'this is it'."

Another Forbes woman said "it was like the whole world was alight" when flames rushed up a gorge towards her property.

The fire threat was expected to ease in many areas as cooler temperatures arrive from the south through Monday.

Vast wildfires are common in Australia's December-February summer months. Some 25 homes were destroyed in the southeast last month following a week-long heatwave that also saw 56 homes razed in separate blazes on the west coast.

Promoted
Listen to the latest songs, only on JioSaavn.com
Experts say heatwaves are becoming longer and more frequent in Australia due to climate change.