Australia says possible debris from Malaysian jet may have sunk 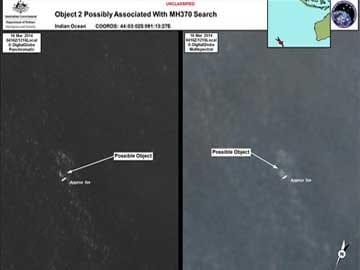 In this satellite imagery provided by Commonwealth of Australia - Department of Defence, a floating object is seen at sea next to the descriptor which was added by the source.

Sydney: The international team hunting for Malaysia Airlines Flight MH370 in the southern Indian Ocean has not turned up anything so far, and Australia's deputy prime minister said the suspected debris may have sunk.

Aircraft and ships have renewed a search in the Andaman Sea between India and Thailand, going over areas that have already been exhaustively swept to find some clue to unlock one of the most inexplicable mysteries in modern aviation.

The Boeing 777 went missing almost two weeks ago off the Malaysian coast with 239 people aboard. There has been no confirmed sign of wreckage but two objects seen floating deep south in the Indian Ocean were considered a credibe lead and set off a huge hunt on Thursday.

Australian authorities said the first aircraft to sweep treacherous seas on Friday in an area about 2,500 km (1,500 miles) southwest of Perth was on its way back to base without spotting the objects picked out by satellite images five days ago.

"Something that was floating on the sea that long ago may no longer be floating," Deputy Prime Minister Warren Truss told reporters in Perth. "It may have slipped to the bottom."

But the search is continuing and Australian, New Zealand and US aircraft would be joined by Chinese and Japanese planes over the weekend.

"It's about the most inaccessible spot that you can imagine on the face of the Earth, but if there is anything down there, we will find it," Australian Prime Minister Tony Abbott told reporters in Papua New Guineau, where he is on a visit.

"Now it could just be a container that's fallen off a ship. We just don't know, but we owe it to the families, and the friends and the loved ones to do everything we can to try to resolve what is as yet an extraordinary riddle."

India said it was sending two aircraft, a Poseidon P-8I maritime surveillance aircraft and a C-130 Hercules transporter, to join the hunt in the southern Indian Ocean. It is also sending another P-8I and four warships to search in the Andaman Sea, where the plane was last seen on military radar on March 8.

In New Delhi, officials said the search in areas around the Andaman island chain was not at the request of Malaysian authorities coordinating the global search for the airliner.

"All the navies of the world have SAR regions," said Capt. D.K. Sharma, an Indian navy spokesman, referring to search and rescue regions. "So we're doing it at our own behest.

"We're doing it on our own because the Malaysian plane is still missing."

Investigators suspect Flight MH370, which took off from Kuala Lumpur for Beijing shortly after midnight on March 8, was deliberately diverted thousands of miles from its scheduled path. They say they are focusing on hijacking or sabotage but have not ruled out technical problems.

The search for the plane also continues in other regions, including a wide arc sweeping northward from Laos to Kazakhstan.

A Norwegian merchant ship, the Hoegh St. Petersburg, was diverted to the area on Thursday and was still searching there and another vessel would arrive later on Friday.

China's icebreaker for Antarctic research, Xuelong, or Snow Dragon, will set off from Perth to search the area, Chinese state news agency Xinhua cited maritime authorities as saying. Up to five more Chinese ships were steaming towards the search zone from across the Indian Ocean, Xinhua reported.

Australian authorities said they had not asked for the ships to search the area. About two-thirds of the missing plane's passengers were Chinese nationals.

There have been many false leads and no confirmed wreckage found from Flight MH370 since it vanished off Malaysia's east coast less than an hour after taking off.

There has also been criticism of the search operation and investigation, as more than two dozen countries scramble to overcome logistical and diplomatic hurdles.

Investigators piecing together patchy data from military radar and satellites believe that, minutes after its identifying transponder was switched off as it crossed the Gulf of Thailand, the plane turned sharply west, re-crossing the Malay Peninsula and following an established route towards India.

What happened next is unclear, but faint electronic "pings" picked up by one commercial satellite suggest the aircraft flew on for at least six hours.

A source with direct knowledge of the situation said that information gleaned from the pings had been passed to investigators within a few days, but it took Malaysia more than a week to narrow the search area to two large arcs - one reaching south to near where the potential debris was spotted, and a second crossing to the north into China and central Asia.

"Plague From China" Should Have Never Happened: Donald Trump On COVID-19