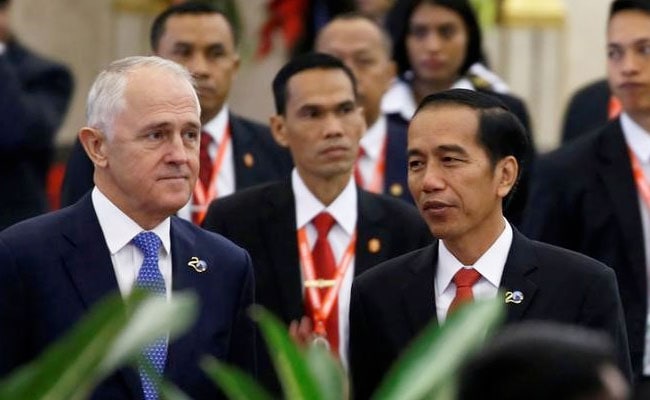 JAKARTA: Australian Prime Minister Malcolm Turnbull said on Tuesday that his country aimed to work more closely with Indonesia over maritime security, but there was no plan for the neighbours to hold joint patrols in the South China Sea.

In an interview with the Australian newspaper last month, Indonesian President Joko Widodo said he would like to see joint patrols and intended to raise the idea with Turnbull, but only if it did not further inflame tensions with China.

"We are not going to undertake any actions which would increase tensions in the South China Sea," said Turnbull, when asked by a reporter whether Indonesia had raised the prospect of conducting joint patrols.

"Our commitment is to increase our cooperation with each other in terms of maritime security. So we talk about more collaboration, more coordination, but it has not been taken any further than that," added Turnbull, who is in Jakarta to attend a summit meeting of the 21-member Indian Ocean Rim Association (IORA).

Indonesia's Coordinating Minister for Maritime Affairs, Luhut Pandjaitan, also said after meeting Australian Foreign Minister Julie Bishop on Monday that he did not envisage joint patrols though there were other areas to cooperate on.

"I don't know whether it necessary for us to do join patrols over there, but for sure, for economic activity, we can do," Pandjaitan said.

China claims almost the entire South China Sea, through which about $5 trillion worth of trade passes each year. Brunei, Malaysia, the Philippines, Taiwan and Vietnam also have claims to parts of the sea.

Indonesia has traditionally taken a neutral position on the South China Sea, acting as a buffer between China and fellow members of the Association of Southeast Asian Nations (ASEAN) that have the most at stake, the Philippines and Vietnam.

But Jakarta was angered after China said the two countries had "overlapping claims" to waters close to Indonesia's Natuna Islands and staged large-scale exercise on the edge of South China Sea in October.

Promoted
Listen to the latest songs, only on JioSaavn.com
Australia - which says it takes no sides on South China Sea disputes but has supported U.S.-led freedom of navigation activities in the region - has been rebuilding ties with Indonesia after a recent spat over military.
© Thomson Reuters 2017