Heavy rainfall has helped to contain and, in some cases, extinguish long-running blazes but an expected return to searing heat and gusting winds Thursday was flagged as a cause for concern. 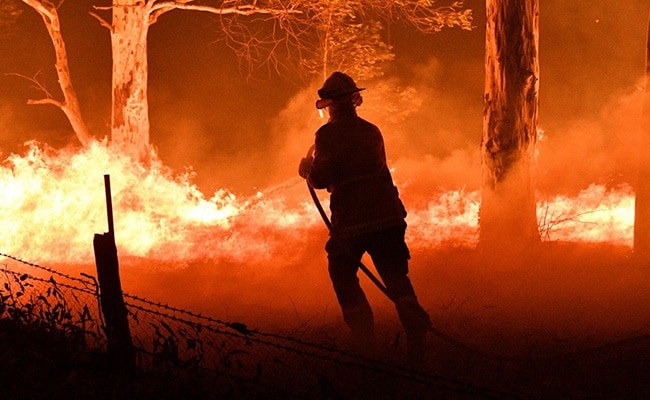 Bushfires fuelled by climate change have killed at least 29 people in Australia. (File)

Australian firefighters are on high alert for the possibility that scorching temperatures and strong winds could whip up new bushfires on Thursday, coming after rain brought welcome respite to fire-ravaged areas.

Unprecedented bushfires fuelled by climate change have killed at least 29 people and devastated vast swathes of the country since September.

Those blazes have been followed by extreme weather -- including intense storms that have battered parts of Australia with giant hail, floods and landslides -- that has hampered clean-up operations in some areas.

Heavy rainfall has helped to contain and, in some cases, extinguish long-running blazes but an expected return to searing heat and gusting winds Thursday was flagged as a cause for concern as dozens of fires continued to burn.

Temperatures will tip above 40 degrees Celsius (104 degrees Fahrenheit) in parts of the country -- including in Australia's biggest city, Sydney -- while wind gusts of up to 90 kilometres per hour (55 miles per hour) are forecast in some areas.

New South Wales Rural Fire Service commissioner Shane Fitzsimmons said firefighters were on "heightened levels of alert", with bans on lighting fires in place across much of the state amid predictions of "severe" fire danger.

"There's every potential for flare-ups and new ignitions to come out of some of these fire grounds, remembering we've got thousands of kilometres of fire perimeter," he told reporters.

"A lot of it has been extinguished, a lot of it is under control -- but there are still pockets that are burning and smouldering and we don't know how many additional roots, tree stumps or branches are likely to flare up under those conditions."

Cooler weather was forecast to return on Friday, again easing the immediate threat from fires, but the bushfire season still has weeks left to run.

A major coal conference in Wollongong -- situated in a coal-producing region south of Sydney that has been hit by massive blazes -- was cancelled this week in response to what local climate activists said was "planned mass protest".

And a January poll released this week found the environment has soared to the top of Australians' concerns, with 41 percent of people polled by market research firm Ipsos ranking it as the most important national issue for the first time.

While Morrison has now reluctantly acknowledged the link between the bushfire disaster and a warming planet, he has stopped short of announcing any sweeping new measures to address to cut emissions.

Instead, the prime minister has signalled that his government would focus on climate adaption and building resilience.

(Except for the headline, this story has not been edited by NDTV staff and is published from a syndicated feed.)
Comments
Australia bushfiresbushfiresHeatwave