Attack on Syria will leave Israel in flames: Iran 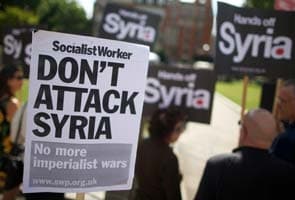 Tehran: Any military action against Syria will have consequences beyond the region and leave Israel in flames, Iran's army chief of staff General Hassan Firouzabadi said in remarks reported today.

His remarks came in response to reports of possible US-led military strikes against Syria - Iran's chief regional ally - in response to its alleged use of chemical weapons in Damascus last week.

The regime of President Bashar al-Assad and the rebel forces fighting to oust it accuse each other of carrying out the attacks that are said to have killed hundreds of people.

General Firouzabadi said, "The US, Britain and their other allies will face losses by marching their armies into the region and Syria."

"Any new (military) operation in the region will leave behind a lot of damage, which will be of interest to no one except the Zionists," he said, while warning that the fallout from the conflict would not be limited to the region.

His remarks echoed those of Iranian officials in recent days.

"The US intervention will be a disaster for the region," supreme leader Ayatollah Ali Khamenei, the Islamic republic's most powerful authority, said yesterday.

"The region is like a gunpowder depot. (Its) future cannot be predicted" in case of any military strikes against Syria.

US President Barack Obama said he has yet to sign off on a plan to strike Syria over the chemical attacks, drawing the West into the brutal 29-month conflict.

Promoted
Listen to the latest songs, only on JioSaavn.com
A Western bombing blitz had appeared imminent earlier this week, but US allies were increasingly reluctant to act before hearing the results of a UN probe into the alleged poisonous gas attacks.