UK police announced a probe into the Sunday incident after video footage posted on social media showed a group of men beating up a man lying on the ground inside the gates of the consulate. 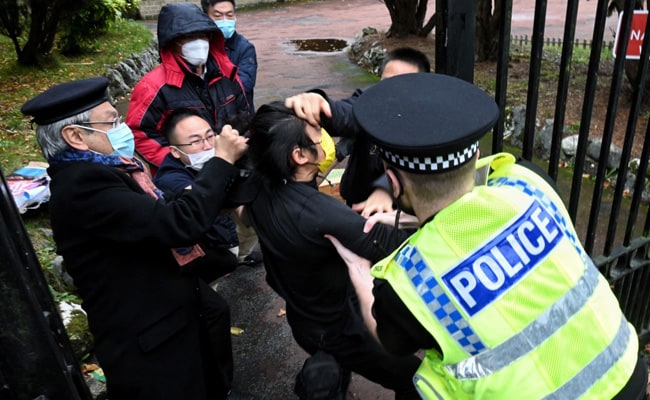 The British prime minister's spokesman said Monday the government was "deeply concerned" after a Hong Kong pro-democracy protester was assaulted in the grounds of the Chinese consulate in Manchester, northern England.

Local police said that a group of men came out of the consulate as protesters held a peaceful demonstration on Sunday afternoon, dragged one of the protesters inside the grounds and assaulted him.

The victim, a man in his 30s, suffered several injuries and spent the night in hospital, police said.

A Downing Street spokesman said reports of the incident were "obviously deeply concerning," adding that it would be "inappropriate" to comment further while the police probe was ongoing.

Video footage posted on Twitter showed a grey-haired man kick protesters' banners and scuffle with a group of demonstrators at the gates of the consulate. Then a group of men were shown punching a protester lying on the ground inside its gates.

The BBC reported that the injured activist was from Hong Kong, naming him as Bobby.

"They dragged me inside. They beat me up," he told the broadcaster.

Chinese foreign ministry spokesman Wang Wenbin told AFP: "We are not aware of the situation you described."

Wang insisted the embassy and consulates in the UK "have throughout abided by the laws of the host country".

The protest took place as China opened its Communist Party Congress, which happens every five years.

Chinese President Xi Jinping in a speech on Sunday hailed a "major transition from chaos to governance" in Hong Kong, following a crackdown on pro-democracy protests.

Greater Manchester Police said in a statement that around 40 people had gathered outside the Consulate for a planned peaceful protest.

Then people from the consulate came out and began removing banners and flags.

Shortly before 4 pm (1500 GMT) "a small group of men came out of the building and a man was dragged into the Consulate grounds and assaulted", police said.

"Due to our fears for the safety of the man, officers intervened and removed the victim from the Consulate grounds."

"What began as a peaceful protest unexpectedly escalated and our officers acted professionally in response to a hostile and dynamic situation," said Assistant Chief Constable Rob Potts.

They said they were "supporting the man" and its major incident team of detectives were working on the case.

Police said they had not made any arrests and asked for witnesses to get in touch and pass on any footage of the incident.

Senior British politicians have condemned the use of violence against a protester.

The Chinese Communist Party "will not import their beating of protestors and denial of free speech to British streets", she wrote.

Influential former Tory leader Iain Duncan Smith tweeted the government must "demand a full apology from the Chinese ambassador to the UK".

The Mayor of Greater Manchester, Andy Burnham, said police were "in close touch with the Home Office and Foreign Office".

Nathan Law, a Hong Kong activist who has fled to the UK, tweeted: "If the consulate staff responsible are not held accountable, Hongkongers would live in fear of being kidnapped and persecuted."

He called for Cleverly and Braverman to "investigate and protect our community and people in the UK".