Human rights activist Nadia Murad, who was awarded the Nobel Peace Prize in 2018 for her efforts to end rape as a weapon of war, first addressed the UN Security Council in 2015 at the age of 22. 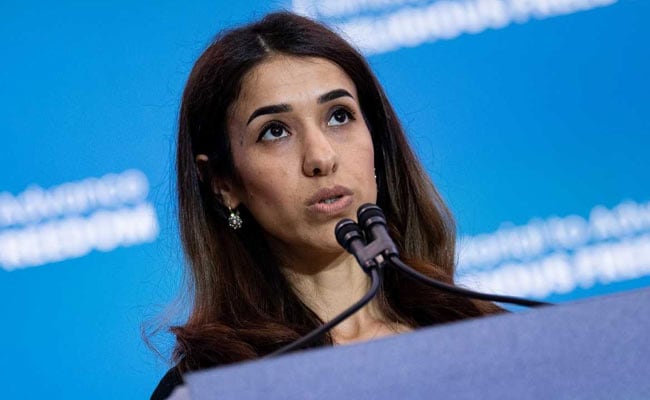 Nadia Murad has previous described to the UN the torture and rape she suffered by ISIS.

Human rights activist Nadia Murad launched global guidelines at the United Nations on Wednesday on how to safely and effectively collect evidence from survivors and witnesses of sexual violence in conflict.

Murad, who was awarded the Nobel Peace Prize in 2018 for her efforts to end rape as a weapon of war, first addressed the UN Security Council in 2015 at the age of 22 - describing the torture and rape she suffered while enslaved by Islamic State a year earlier.

Dubbed the Murad Code, the new guidance was developed with British funding by campaign group Nadia's Initiative and the Institute for International Criminal Investigations, aiming to reduce the risk of further trauma for survivors when providing evidence.

"The Murad Code lays out clear and practical guidelines for centering the needs of survivors when collecting evidence, and ensuring that they receive justice and support, rather than repercussions. Survivors deserve at least that," she said.

The announcement comes as the United Nations says it is increasingly hearing accounts of rape and sexual violence in Ukraine and a Ukrainian human rights group accused Russian troops of using rape as a weapon of war. Since invading Ukraine on Feb. 24, Russia has denied attacking civilians.

"I am appalled by the growing number of reports of sexual violence by Russian forces emerging from the conflict in Ukraine," British Foreign Secretary Liz Truss said in a statement, describing the Murad Code as a "vital step" towards support for survivors and bringing perpetrators to justice.

Murad worked with human rights lawyer Amal Clooney to lobby the Security Council for a UN investigative team to collect, preserve and store evidence in Iraq of acts by Islamic State that may be war crimes, crimes against humanity or genocide. The council created the team in 2017 and it began work a year later.