Violence is surging across Afghanistan and in Kabul as the US and the Taliban negotiate a peace deal ahead of elections planned for September 28. 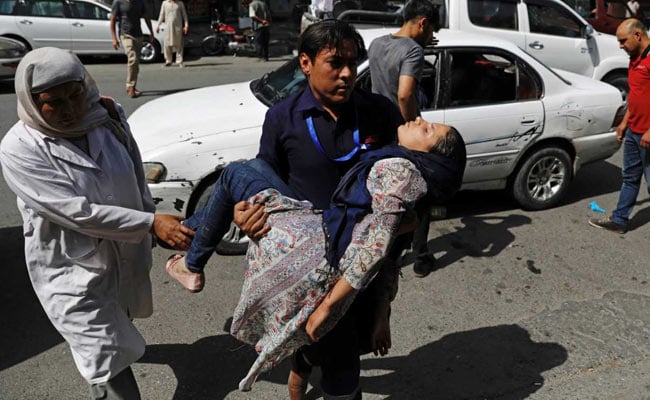 At least 145 people were wounded in the explosion in Kabul

At least 14 people were killed and 145 wounded in a massive Taliban bomb blast Wednesday as fresh violence gripped Kabul even as insurgents appear to be closing in on a peace deal with the US.

The bloodshed in the capital comes amid an ongoing surge in attacks across Afghanistan, where some 1,500 people were killed or injured last month alone.

A huge plume of black smoke was seen rising over western Kabul following a massive explosion at the entrance to a police compound around 9:00 am (0430 GMT).

The Afghan interior ministry said the explosion was caused by a car bomb, but the Taliban, which claimed the attack, said it was a much larger truck bomb. An Afghan security official also told AFP it was a truck bomb.

Afghan authorities said at least 10 civilians and four police officers had been killed. Another 145 people, including 92 civilians, were wounded.

"As the air cleared, I saw several women crying, desperately looking for their husbands or children near the blast site," local journalist Zakeria Hasani, who lives near the police station, told AFP.

"My head is spinning and still I don't know what has happened but the windows of about 20 shops around one kilometre from the blast site are broken," he said.

The US and the Taliban met in Doha this week for an eighth round of talks aimed at striking a peace deal that would slash the American military presence in Afghanistan.

Despite the bloodshed sweeping the nation, both sides have cited "excellent progress".

The attack came after the Taliban warned Afghans on Tuesday to keep away from public gatherings ahead of the presidential election planned for September 28.

The Taliban ordered their fighters to "stand against" the polls, and previous elections have been rocked by frequent attacks by militants trying to undermine Afghanistan's fragile democracy.

More than 1,500 civilians were killed or wounded in the Afghan conflict in July, according to the United Nations, the highest monthly toll so far this year and the worst single month since May 2017.

The blast was not the only violence to rock the Afghan capital in the past 24 hours.

Afghan commandos stormed three Islamic State group houses in Kabul, officials said. Despite non-stop strikes from the US and Afghan forces, the Middle Eastern jihadist group has maintained a persistent presence in Afghanistan since 2015.

The houses were being used as bomb factories, the Afghan intelligence service said in a statement. Two IS fighters and three Afghan commandos were killed in the raids.

"A lot of explosives, suicide vests, arms and technical tools of making car bombs and mines were seized," the statement read.

In Baghlan province in northern Afghanistan, authorities said they stopped an attack on a security forces convoy.

According to an Afghan army statement, three attackers were driving in an explosives-packed Humvee toward the convoy, but Afghan troops spotted them and destroyed the vehicle with a rocket-propelled grenade.

On Tuesday, at least five people were killed and seven wounded in Kabul when a vehicle carrying workers from the counter-narcotics directorate was bombed, the interior ministry said.

The violence comes as Afghans prepare to celebrate the Eid al-Adha holiday next week.