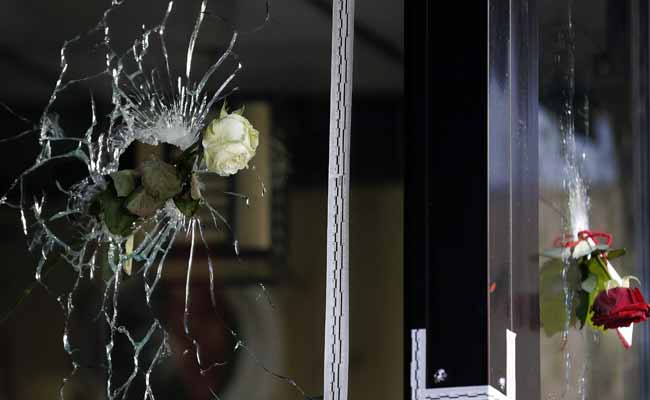 Roses are placed through bullet holes in a window at the restaurant on Rue de Charonne, Paris on Sunday, November 15, 2015, where attacks took place on Friday. (Press Trust of India photo)

Paris: It is now known that at least three French suicide bombers were involved in the deadly attacks on Paris, which killed 129, the city prosecutor said on Sunday.

Two of them were living in the Belgian capital Brussels, Paris prosecutor Francois Molins said in a statement.

He said one of them was a 20-year-old man who blew himself up near to the French national stadium, while the second, a 31-year-old man, detonated his explosives belt at a bar on the bustling Boulevard Voltaire.

Police had on Saturday identified the first of the attackers, naming him as 29-year-old Paris native Omar Ismail Mostefai and saying he was involved in the attack on the Bataclan music venue where 89 people were killed.

Mostefai, whose identity was confirmed using a severed fingertip, was known to the intelligence services as someone close to radical Islam, but he had never been linked to terrorism.