At Least 20 Killed In Train, Bus Collision In Pakistan: Officials

The incident took place in Sukkur district, where the incoming Pakistan Express -- on its way from Karachi to Lahore -- hit the bus, which was heading to Sargodha in central Punjab province. 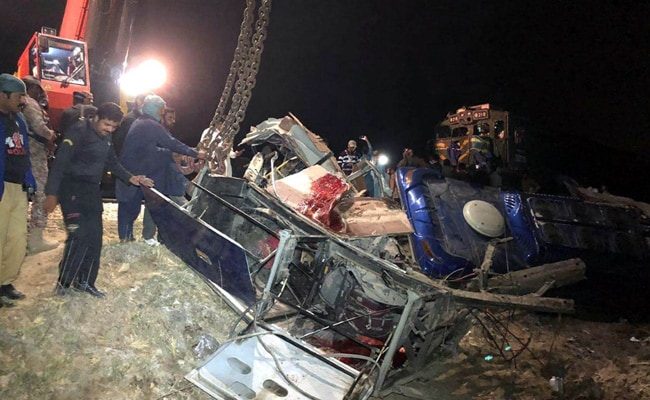 The accident occurred at an unmanned railway crossing, official (Representational)

A horrific collision between a speeding train and a passenger bus killed at least 20 people and left scores injured near the Rohri railway station in Pakistan's southern Sindh province on Friday night.

Sukkur Commissioner Shafiq Ahmed Mahesar confirmed that at least 20 people died in the incident, adding that the casualties could rise as the condition of several of the injured was critical.

"We have shifted at least 60 injured people to hospitals in Rohri and Sukkur," he said.

The accident took place at the unmanned Kandhra railway crossing, near the Rohri railway station, when the 45 Up Pakistan Express train that was coming from Rawalpindi towards Karachi collided with a passenger bus.

"It was a horrible accident. So strong was the impact of the train hitting the bus that it was split into three parts," he said.

Rescue officials said among the victims, some died on the spot while others breathed their last while being shifted to hospitals.

Commissioner Shafique Ahmed said the injured, including women and children, were taken to different hospitals in Rohri and Sukkur.

"It is a huge tragedy and all administration and police officials are rushing to the site. It was an unmanned railway crossing and unfortunately, the driver of the bus took a risk by trying to cross it when the train was coming in full speed," he said.

According to a Pakistan Railways spokesperson, the bus driver was apparently at fault in the incident.

He said the train''s engine was damaged in the collision, while the assistant driver sustained injuries.