At 93, this man killed for love 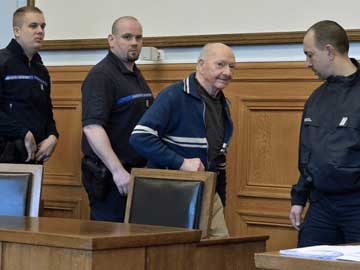 Police escort Marcel Guillot (C), 93, in the courthouse of Reims, northeastern France, on March 28, 2014, during his murder trial.

Reims, France: France's eldest detainee was sentenced to 10 years in prison today for having killed an 82-year-old woman who spurned his advances and whose battered body was found in a stream.

A court in the northeastern city of Reims found Marcel Guillot, a 93-year-old man nicknamed "Grandfather Marcel", guilty of "death blows on a vulnerable person with premeditation".

The body of Nicole El Dib was found in December 2011 in a stream that crossed her property near the village of Saint-Gilles, carrying traces of violent blows and strangling.

A DNA analysis of blood found on a watch left on the crime scene eventually pointed the finger of blame on Guillot.

He explained to police that he had felt humiliated by the victim, whom he had a crush on, and had gone to her home to punish her.

During the trial, Guillot, who has problems hearing, repeatedly denied any wrongdoing, saying he never hit the victim who he said killed herself by slipping on a carpet and hitting a wardrobe.

"I wanted to know why she refused to see me... I don't understand, we were always good together. I did not hit her, she was my girlfriend," he told the court.

But the prosecutor said the defendant had "let rip his fury".

Promoted
Listen to the latest songs, only on JioSaavn.com
"There is no doubt about criminal intent," the prosecutor said, blasting Guillot for expressing "no regret nor any compassion towards the person he called his friend."