Astronauts Chen Dong and Liu Yang returned to their cabin module in the early hours of Friday. 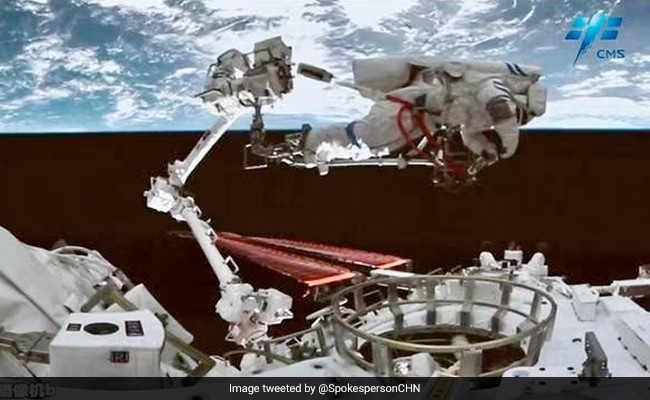 Astronauts Chen Dong and Liu Yang returned to their cabin module in the early hours of Friday, the China Manned Space Agency (CMSA) said, declaring the first spacewalk of the six-month Shenzhou-14 mission a "complete success".

China's heavily promoted space programme has already seen the nation land a rover on Mars and send probes to the Moon.

State media images showed the pair opening the hatch of the module and using a robotic arm to manoeuvre equipment with the rotating earth in the background.

"Hello, everyone. I'm out of the module. I'm feeling good," Chen, a former military pilot, said in a video.

The pair completed a series of tasks including installing external parts to the module and testing its functions, while the remaining astronaut Cai Xuzhe coordinated from inside the cabin, official news agency Xinhua reported.

China launched the Shenzhou-14 spacecraft on June 5, sending the three astronauts to complete the construction of Tiangong.

The space station, whose name means "heavenly palace", is expected to become fully operational by the end of the year.

Chen, Liu and Cai are the second crew to spend six months aboard Tiangong after the last one returned to earth in April following 183 days on the space station.

Tiangong's core module entered orbit early last year and is expected to operate for at least a decade.

The completed station will be similar to the Soviet Mir station that orbited Earth from the 1980s until 2001.