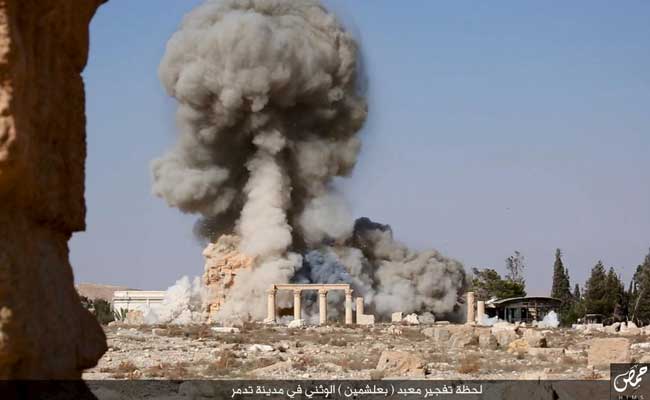 An image distributed by the ISIS shows the destruction of a Roman-era temple in the ancient Syrian city of Palmyra. (Reuters file photo)

Beirut: President Bashar al-Assad called on the United Nations and other international organisations on Wednesday to help Syria to restore Palmyra after government forces drove Islamic State militants out of the ancient city.

State news agency SANA said Assad made the appeal in a message to Ban Ki-moon, in which he also thanked the United Nations Secretary-General for welcoming the expulsion of Islamic State from the Syrian city, a UNESCO world heritage site.

The Western response to Sunday's recapture of Palmyra has been muted. While some governments have welcomed the setback for Islamic State, they are reluctant to celebrate any victory for a president whose departure many of them demanded five years ago.

The jihadist group seized Palmyra in May last year and dynamited two of its Roman-era temples, a triumphal arch and funeral towers. It also left mines and bombs amid the ruins and smashed statues and displays at the city museum, Syrian and Russian officials say.

Russia, which provided vital air support for the army assault, said earlier this week it was sending militant engineers, sniffer dogs and "demining robots" to help defuse explosives in the old city.

Interfax news agency said the deployment of Russian military engineers in Syria will be completed in early April, and that more than 90 personnel would be sent to Syria for the work.

In his message to Ban, Assad renewed Syria's offer to cooperate with "all sincere efforts" to combat terrorism, SANA said. "This moment might be the most appropriate to accelerate the collective war against terrorism," it quoted him as saying.

The United States, which has been leading a separate campaign against Islamic State in Syria and Iraq since August 2014, says it does not cooperate with the Syrian military.

Syrian government forces and their militia allies, backed by further Russian air strikes, have targeted two towns to the east and west of Palmyra since Sunday, seeking to eliminate Islamic State from an expanse of desert in the centre of the country.

They have bombarded and virtually surrounded the town of al-Qaryatain, state media have reported. Heavy air strikes have also hit the town of Sukhna, where many Islamic State fighters retreated to when they pulled out of Palmyra.

(This story has not been edited by NDTV staff and is auto-generated from a syndicated feed.)
Comments
PalmyraPalmyra SyriaISIS in syria