A team of the National Accountability Bureau (NAB) arrested Asif Ali Zardari, the co-chairman of the Pakistan Peoples Party from his house on Monday hours after the Islamabad High Court rejected his bail plea. 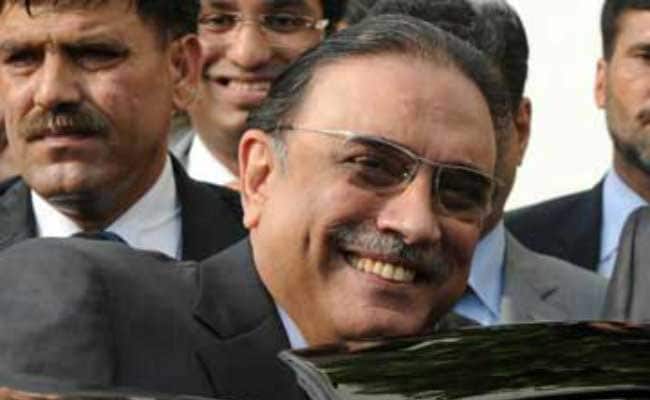 Pakistan's former president Asif Ali Zardari was sent on a 11-day physical remand by an accountability court on Tuesday, a day after he was arrested in a multi-million dollar money laundering case.

A team of the National Accountability Bureau (NAB) arrested the 63-year-old co-chairman of the Pakistan Peoples Party from his house on Monday hours after the Islamabad High Court rejected his bail plea.

He was presented before accountability court judge Mohammad Arshad Malik, who granted the NAB 11-day physical remand of Zardari and ordered that he be presented before the court again on June 21.

During the court proceedings, the NAB requested 14-day physical remand for Zardari, which was opposed by his counsel Farooq H Naek.

NAB prosecutor Muzaffar Abbasi informed the court that fake bank accounts were opened with the help of bank officials. Abbasi said that Zardari had been arrested and his remand was necessary for investigation.

Zardari also moved an application through lawyer Farooq Naek for additional facilities during detention, which also include a request for servant.

Talking to the media outside the court, Zardari said that Prime Minister Imran Khan was "selected" leader and not elected. He claimed that interior minister Ijaz Shah ordered his arrest.

Zardari and his sister Faryal Talpur are two of the main accused in the money laundering scandal which utilised fake bank accounts to channel illegally gained funds out of Pakistan.

According to the NAB officials, the two made transactions of Rs 150 million through alleged fake bank accounts.

The arrest warrants were issued on Sunday by the NAB, the anti-corruption watchdog, which is probing them in the fake bank accounts case.

Strict security arrangements were made for Zardari's appearance in court on Tuesday and around 1,500 security personnel were deployed. At least 300 policemen were deployed outside the NAB headquarters, while roads leading to accountability court remained closed for all kind of traffic.

Prior to his arrival at the court, a three-member team of doctors conducted a medical examination of the former president. According to the NAB sources, Zardari was found to be fit for physical remand.

Zardari, the 11th President of Pakistan from 2008 to 2013, has denied any link with the fake accounts.

He has said the allegation was part of a vilification campaign by the ruling Pakistan Tehreek-e-Insaf party to malign opposition leaders.

He was elected as a member of the National Assembly from the NA-213 Nawabshah seat of Sindh province in last year's general election.

Zardari's arrest prompted a strong reaction from the Opposition and sporadic protests by PPP workers in various parts of the country, mostly in the party-ruled Sindh province.

Terming his father's arrest an act of "political victimisation" by the Imran Khan government, PPP chairman Bilawal Bhutto-Zardari said the Constitution guarantees the right of fair trial to every citizen. He appealed to party workers to remain calm and wait for party directives.

The main opposition Pakistan Muslim League-Nawaz had questioned the timing of the arrest, alleging that it had been done to divert public attention from the "IMF-prepared anti-people budget" that the government would present on Tuesday.