As Trump Prepared For Riyadh Visit, Saudis Block US On Terrorist Sanctions

"They don't want to admit they have an issue in their back yard," said a U.S official familiar with the events, who spoke on the condition of anonymity to discuss sensitive diplomacy. 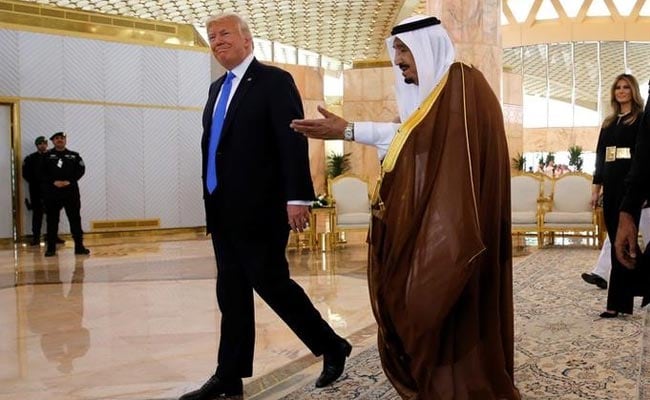 A senior Saudi official, acknowledged the opposition to the Trump administration's plan.(Reuters)

Saudi Arabia, the oil-rich kingdom touted by President Donald Trump as a key ally in the fight against the Islamic State, has helped block a Trump administration proposal to impose sanctions against a Saudi branch of the terrorist group, documents show.

The plan to add the Islamic State's Saudi affiliate to a U.N. list of terrorist groups was quietly killed two weeks ago in a bureaucratic maneuver at the U.N. Security Council, records show. U.S. officials familiar with the move said the Saudis objected to the public acknowledgment of the existence of a separate Saudi offshoot of the terrorist group inside the kingdom.

"They don't want to admit they have an issue in their back yard," said a U.S official familiar with the events, who spoke on the condition of anonymity to discuss sensitive diplomacy.

The news of the maneuver comes as Saudi Arabia hosts Trump in Riyadh in his first visit to a foreign capital since becoming president. U.S. and Saudi officials are expected to use the visit to underscore close cooperation between the two countries in battling Islamist extremist groups. Riyadh has contributed money, arms and fighter jets to the international coalition fighting the Islamic State in Syria.

The terrorist group in 2014 declared the existence of a separate Saudi province, or wilayat, with its own cadre of Saudi operatives seeking to overthrow the monarchy. The group has since claimed responsibility for several attacks inside the country, including a suicide bombing at a mosque in 2015 that killed 15 people.

The Trump administration's proposal to add the "Islamic State in Saudi Arabia" to a list of U.N.-sanctioned terrorist groups was formally blocked on May 5 by Senegal and Egypt, two members of the U.N. Security Council. Egyptian diplomats explained to their U.S. counterparts that they acted at the behest of Saudi Arabia, according to U.S. officials and internal emails describing the exchange. It was the second time in a year that Saudi officials intervened to prevent the local affiliate from being added to the U.N. terrorist list.

A senior Saudi official, speaking by telephone from Riyadh, acknowledged his government's opposition to the Trump administration's plan. He said formal recognition of a separate Saudi branch of the Islamic State would have been both unfair to Saudi Arabia and an exaggeration of the local cell's significance.

Acceding to the U.S. proposal could have resulted in "reputational risks" for the kingdom, possibly including losses in tourist revenue and higher insurance premiums, the official said.

Promoted
Listen to the latest songs, only on JioSaavn.com
Saudi Arabia is one of several countries that have opposed U.S. efforts to add local branches of the Islamic State to the U.N. terrorist list. Russian diplomats earlier this month quashed a U.S. proposal to sanction Islamic State chapters in Libya, Afghanistan and Yemen.