As A Young Man, He Had To Drop Out Of Georgetown University. Six Decades Later, He Finally Made Up For It

Although Carlos Sera's family couldn't have known this day was coming, maybe they had an inkling that something in his life had been left unfinished. 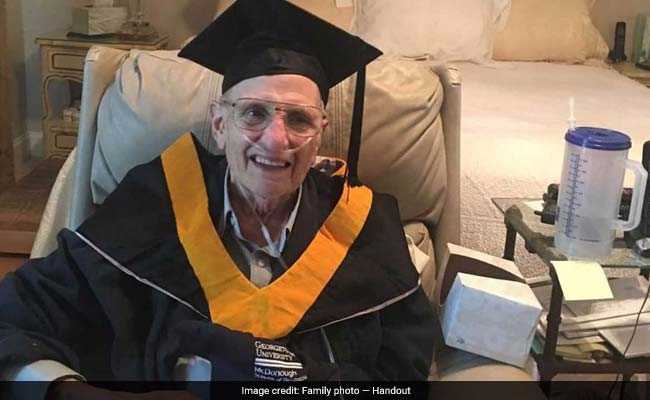 This month Carlos Sera finished the class - with an A - and his college education was complete.

Dressed in a black cap and gown with a velvet-trimmed stole and surrounded by family, Carlos Manuel Sera watched the live stream in his son's house in Houston Friday and waited. First came the valedictorian. Then the salutatorian. And then the senior associate dean for the undergraduate program at Georgetown University's McDonough School of Business read out Sera's name.

His children and grandchildren cheered. He rose shakily to his feet. At age 81, he was officially a graduate. His shoulders heaved and he began to weep - for the past, for the present, for the unexpected events that had tied together the loose ends of his life like a small miracle.

In the 1940s and 50s, when Sera was growing up in Washington, D.C., as the son of a high-ranking diplomat in the Embassy of Cuba, the world seemed to roll out before him like a carpet. Already as a teen he was attending cocktail parties as his father's representative and moving comfortably among Washington society diplomatic elite. But his biggest dream lay within the borders of his home town: to attend Georgetown University.

That came true in 1955 when he was accepted as an undergraduate. His father, who had also studied there but had left to pursue diplomatic work before receiving a degree, wrote an overjoyed letter thanking the university. "I know perfectly well that graduates from Georgetown University are looked upon with great respect and a sort of gracious envy everywhere," he wrote.

Little did the father know that it would take 63 years for his son to become one of those graduates.

Sera matriculated at the university and loved it. He played on the basketball team and joined the Hispano-Americano club. "Georgetown is embedded in me; it's mine," said Sera from his home in Houston. "I was always enthralled by the atmosphere. . . . And being Cuban and being in the diplomatic corps, well that opened up a lot of doors with other foreign students whose parents were also diplomats."

That life crashed to a halt on January 1, 1959, when revolutionaries led by Fidel Castro ousted the Cuban government. Sera's father was told that after 45 years of service he was out of a job. His income and pension dried up and his assets in Cuba were frozen.

"Those first few months were very traumatic," Sera recalled. "I could see my whole life just withering away as I read more and more all of the declarations that were coming out of Cuba. I saw all my expectations of what I thought would be my future dissolve."

Ahead of graduation time, Sera had already been offered a job with Sears, Roebuck and Co. Impatient to start helping his family financially, he started in the new position without finishing the tax class that would have completed the final four credits of his degree. He went on to become a successful international businessman, working in Latin America, Africa and the Middle East and finally settling in Houston with his wife and four children. Wherever he went, from the streets of Bogota to the Rotary Club he joined in the U.S., he ran into Georgetown graduates, and their camaraderie helped him professionally and socially. Only he knew he wasn't quite one of them. And while he didn't dwell on it or mention it to anyone, somewhere deep down it bothered him. "Not finishing was always there," he said.

It wasn't until this January, when his granddaughter Vanessa Weitzman, 18, visited Georgetown on a college tour, that the truth surfaced. She returned with a sweatshirt for her abuelo, and a slew of questions. What had his major been? Why had she never seen photos of his graduation?

Sera confessed that he had come close to graduating, but had not quite made it.

"He was kind of sad, because that was something he took a lot of pride in, going to Georgetown. So he was kind of gloomy and melancholy," Weitzman said.

Sera recalled the moment as "very difficult. Because they were so enthusiastic about my being a student there."

But there was little time for gloom. Sera's daughter (and Vanessa's mother) Mayte Sera Weitzman snapped into action. She sent a letter to the university explaining the situation and asking what her father might do to complete his degree.

"It landed on someone's desk who cared," she said. "It's kind of a dream because someone paid attention. It could have been easy enough to say, "Eh, it was too long ago."

Instead, the university found that he had only one class to take, and arranged for him to take it remotely, throwing in a scholarship that covered the expenses.

Sera took the class, now called "Federal Income Taxation," with Thomas Cooke, a professor at the university's McDonough School of Business, and wrote a paper on the new tax code (he is a fan).

Sera relied on the internet less than most of Cooke's students. And his enthusiasm was striking. "He has this love for this institution and you can just feel it through the telephone," Cooke said.

This month Sera finished the class - with an A - and his college education was complete. He had hoped to attend the ceremony in person, but a recent stroke left him unable to travel, so he watched the graduation remotely.

"Carlos, we know you're watching from Houston," said Paul Almeida, Dean and William R. Berkley Chair at McDonough from the stage. "We are tremendously proud of you and your lifetime of accomplishments. And, while you have always been a Hoya, today we make it official." Almeida added that on Tuesday he would be visiting Sera to personally hand him his diploma.

Despite his fragile health, Sera said it was important to him not to stay seated when his name was called. "I stood up," he said. "This was the way to do it. So I stood up and I said thank you to the Big Boss for everything. You know you've got to be grateful for little things, because they add up to big things as time goes on."

Although Sera's family couldn't have known this day was coming, maybe they had an inkling that something in his life had been left unfinished. A bottle of Bacardi golden rum that he had bought on a visit to Cuba before the revolution and later given to his son had never been opened; the right occasion had never presented itself. On Friday, the family pulled out the bottle with its yellowed, peeling label, uncorked it and poured it into small crystal glasses.

Promoted
Listen to the latest songs, only on JioSaavn.com
Sera raised it to his lips and declared it delicious.

(This story has not been edited by NDTV staff and is auto-generated from a syndicated feed.)
Comments
Georgetown UniversityCollege DropoutsUnited States